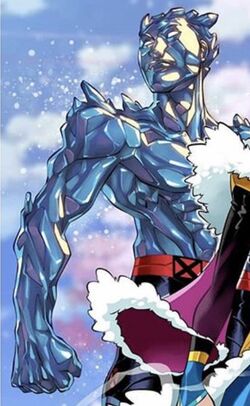 Does anyone else find it ironic that I'm so hot?

Bobby Drake was born to close-minded, conservative parents. Growing up, he always knew he was gay, but was too terrified to tell them out of fear they would disown him. However, he never got the chance, as his mutant powers manifested at the age of 14 when he accidentally froze himself into a pool.

Disgusted and hoping for a cure, Bobby's parents reached out to Professor Charles Xavier, whom they mistakenly believed took in mutants to teach them how to be "normal". After meeting with the Professor, Bobby became overjoyed at the possibility of living among others like him, and jumped at the chance to leave his parents.

Bobby was then taken to the island of Krakoa where the Xavier Institute was located, and as introduced to the mutant super team X-Force. Bobby was Xavier's first student to not be drafted onto the team right away, and everyone came to view Bobby as a younger brother. However, he developed a slight crush on Angel.

Eventually, Bobby grew a desire to join the team, and wanted to prove himself to the others. He hid away in the Blackbird while they jetted off to go on a mission against the Brotherhood, who were terrorizing a city in London. When the jet landed, Professor X revealed he knew Bobby was there, and ordered him to stay in the jet, which was greatly disappointing to him. He sat back and watched the battle, and eventually noticed that the Brotherhood member, Pyro, was gaining the upper hand on Angel and was trying to burn his wings off. Bobby jumped into action and froze Pyro unexpectedly, saving Angel's life. He then chose the codename Iceman and was officially welcomed onto X-Force, so long as he agreed to put his studies first.

[[Category: In a Relationship with Jean-Paul Beaubier Characters]]