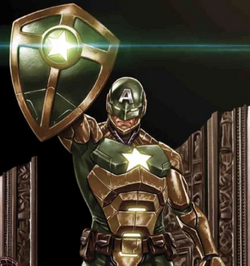 Bob Denman was at a dead end career in marketing, with a cheating wife and two ungrateful sons. Eventually, he was fired and his wife divorced him the next week. Feeling at a loss, Bob's grief was manipulated by the terrorist organization, Hydra, who convinced him to become one of their foot soldiers.

He believed working with Hydra would give him a new life purpose, and help him support himself. He was eventually part of a squadron of soldiers that were all killed by Deadpool, who spared Bob and forced to accompany him on the rest of his adventure. Bob ended up having a lot of fun with Deadpool, and the two exchanged Facebooks. However, he refused to leave Hydra, afraid they would assassinate him if they betrayed him.

His return resulted in him becoming a legend as the foot soldier who escaped the wrath of Deadpool. This led to him being selected to be the face of Hydra's Super-Soldier Project. He ended up being the first successful test subject and was outfitted with a suit of armor inspired by both Captain America and Iron Man.

Dubbed "Captain Hydra", he was then used in a propaganda campaign to try and drum up support of average civilians. He was eventually forced to participate in the raid on New York City, where he was confronted by Captain America. He attempted to fight back, but was sorely beaten and imprisoned in the Raft.

Retrieved from "https://marvelcomicsfanon.fandom.com/wiki/Robert_Denman_(Earth-101)?oldid=249558"
Community content is available under CC-BY-SA unless otherwise noted.