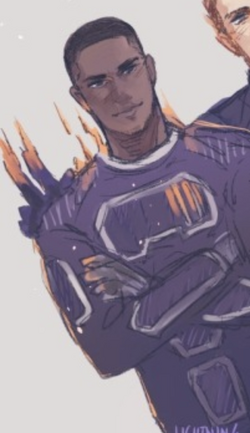 Please, you've spent your entire life having everything handed to you, and now you live in in ivory tower with a robot buddy who probably brushes your teeth for you! I grew up on the streets, I fought for my rights to survive. If any one of us is the Human Torch, it's me.

Rusty Clayton lost his father to gang violence when he was only five years old. He was then raised by his mother, who struggled to get by, finding it hard to keep a steady job due to the racist area they lived in. Eventually, she was diagnosed with cancer, and Rusty took it upon himself to support her. He became a mechanic at his Uncle Francis's garage and began earning a steady income.

However, Rusty's life was thrown upside down when the Terrigen Mists began spreading across the world. On the same day his mother succumbed to cancer and he was considering taking his own life, he was exposed to the Mists and went through the process of Terrigenesis. When he emerged, he discovered the ability to ignite himself on fire and use the flames to fly, even becoming capable of controlling fire with his mind.

His Uncle Francis then took him under his wing and convinced him that his parents would've wanted him to use his powers for good. He took this to heart, and decided to become a vigilante, opting to call himself the Human Torch. This inevitably led to the other Human Torch, of the Fantastic Four, taking notice of him. The two instantly got off on the wrong foot, and Rusty refused to give Johnny Storm respect, believing him to be a spoiled rich kid pretending to be a hero.

However, Rusty eventually met the other members of the Fantastic Four, and came to discover their nobility. They even helped him understand his Inhuman DNA, and introduced him to other new Inhumans, as well as Queen Medusa, who offered Rusty a home on Attilan. He decided to give it a try, and said goodbye to his uncle before embarking to the moon in order to live among his people.

It was there that he proudly embraced the mantle of the Inhuman Torch, becoming friends with other new Inhumans Quake, and Agent of S.H.I.E.L.D. who often visited Attilan, and Synapse, whose father, the Shredded Man, was an enemy of the throne. It wasn't long until Rusty became disillusioned with the Royal Family, believing the whole concept of Kings and Queens to be pretentious, and began to question what right Black Bolt and Medusa had to command the rest of them.

He eventually left Attilan and returned to Earth, where he thought about joining the Heroes for Hire. However, his uncle convinced him that cashing in on his abilities was wrong. Reluctantly, Rusty agreed and became roped back into the Royal Family's drama when the Kree Empire ordered the extinction of all Inhumans. He ended up joining them on their excursion of the planet Hala, where Black Bolt was killed.

Rusty mourned the loss of his King, and wished the other Inhumans luck on their journey into mystery. He, on the other hand, opted to return to the Earth and join the Future Foundation, which was established as a replacement for the Fantastic Four.

Retrieved from "https://marvelcomicsfanon.fandom.com/wiki/Robert_Clayton_(Earth-101)?oldid=249517"
Community content is available under CC-BY-SA unless otherwise noted.