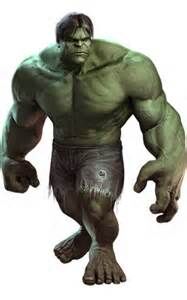 Bruce Banner was a scientist working one the Gamma Bomb project on the Omega Base. He was also friends with Reed Richards. During the attack on the Omega Base, he is sealed inside a room. After the heroes find him, they receive intel that a gamma bomb is set to explode. Banner disarms the bomb, and the heroes continue on their mission, leaving Banner behind because, after all, "He's no hero". He was shown defeated as the Hulk outside Doom's castle after he obtained Odin's powers, thus confirming that during Doom's rule, Banner had the Gamma accident that turned him into the Hulk. It was shown later Hulk had been getting phyciatric help by Mr. Fantastic who helped him vent through haiku.

Hulk participated in the Civil War (as an Anti-Reg movement member), and later fought against the Nanite-controlled members of "The Fold" as a member of the Ultimate Alliance, defeating a nanite-controlled A-Bomb during the Siege of Wakanda.

After the Wrecking Crew's attack in NYC's subway system (which happened months after the Civil War), a meeting had taken place in Washington D.C. This was over the superheroes' limitations under the Superhuman Registration Act. Hulk, Spider-Man, Wolverine, and Deadpool were sent in case of supervillain attacks. Shock of shocks: the meeting was attacked by a supervillain. The attacker was someone claiming to be Blizzard. However he was then attacked himself by Taskmaster of all superhumans. One confusing battle later, "Blizzard" attempted to take the President via a teleporter implanted in his armor. However he is shot down by Taskmaster.

Taskmaster explained that the Blizzard they fought was really a Skrull. He parts off to find and kill more of them in the city. They squad of heroes are contacted by S.H.I.E.L.D., one of their platoons is being attacked. While making their way downtown, they are suddenly attacked by Mac Gargan, the new Venom. The villain wanted revenge on the U.S. government for inadvertently creating the Fold; claiming that formally infected supervillaisn have gone into seclusion, others even committing suicide. Venom is of course defeated.

Retrieved from "https://marvelcomicsfanon.fandom.com/wiki/Robert_Bruce_Banner_(Earth-6109.2)?oldid=154752"
Community content is available under CC-BY-SA unless otherwise noted.