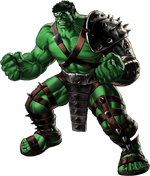 Presumed to be the same like Hulk's early years from Earth-616.

When the army launched Gamma bombs at countries all over the world, Bruce was battling Abomination. Once they saw 3 nuclear missiles above them, one of them was blasted with a gamma missile as well and poisoned the area with Gamma radiation.

When the government put America under quarantine, Hulk attempted to read the name of the land that was written on one of the dome's walls, and mistook it for "Amurrraka".

Once I.D.U.N. was founded, they confronted an Incursion leading to Earth-102751.

When they finally met this world's Hulk, they saw that the Incursion's source was in Bruce's castle.

Hulk thought this would destroy the dome and expand the realm, but instead it created an Incursion.

When I.D.U.N. sent Invisible Woman to empty Bruce of the additional Gamma radiation. They then found out he had built another Gamma ray device that recharges him. After Red Hulk bruised him and caused him to recharge 6 times, Bruce died from the huge amount of Gamma radiation.

Bruce is an angry beast, who doesn't retain many of it's human origins.

Transformation: The process by which Banner usually transforms into the Hulk is presumably the result of the chemical catalyst, adrenaline (a.k.a. epinephrine). As in normal human beings, Banner's adrenal medulla secretes large amounts of adrenaline in time of fear, rage, or stress, which hormonally stimulates the heart rate, increases blood-sugar levels, and inhibits sensations of fatigue. Whereas the secretion heightens normal physical abilities in normal human beings, in Banner's case it triggers the complex chemical-extra-physical process that transforms him into the Hulk. The total time of transformation falls anywhere between seconds to five minutes, depending on the initial adrenaline surge, which will be determined by the original stimulus. Soon after the transformation, the amount of adrenalin in the Hulk will return to more normal, reduced levels. However, there have been instances in which Banner became the Hulk without any discernible increase in heart rate or adrenal levels, suggesting that the true trigger mechanism into the Hulk is far more psychological than physical. When the Hulk transforms back into Banner, the excess muscle mass and energy is lost, presumably to the same place he derives it. As the Hulk's transformation is mostly a stress reaction, it is virtually impossible to attack, wound or sedate him in his human form without Hulk erupting almost instantaneously in self-defense. After the nuclear war, Hulk can no longer transform into a human.

Dr. Bruce Banner is a super genius in nuclear physics,} possessing a mind so brilliant that it cannot be measured by any known intelligence test. Banner is regarded by Iron Man as the greatest nuclear scientist on Earth. Bruce also has expertise in the fields of engineering and biology. According to Bruce Banner, he is one of the eight smartest people on the planet. When Banner is the Hulk he can influence the Hulk's behavior only to a limited extent. However, recent facts indicate that Banner subconsciously restrains the Hulk. The Hulk is a skillful and capable warrior, demonstrating vast versatility and intuition in battle, like anticipating and exploiting the weakness of Hyperion.

Class 100+, although this strength chart is strictly made for comparison purposes between characters, and so it is not a literal description. The Incredible Hulk is one of the physically strongest beings in the Marvel Universe, and the strongest mortal to ever walk the planet Earth. In human form Bruce Banner possesses the normal human strength of a man of his age, height, and build who engages in no regular exercise. When the Hulk gets enraged his physical strength increases exponentially. The Hulk has no strength limit, his strength varies up to literally unlimited levels, according to the extremely powerful entity Beyonder. Most currently the Mad Thinker's mathematical computations also inferred that the Hulk's strength is indeed incalculable. Additionally, as the foundation of his phenomenal strength, his rage is also described as being limitless.

Retrieved from "https://marvelcomicsfanon.fandom.com/wiki/Robert_Bruce_Banner_(Earth-102751)?oldid=254610"
Community content is available under CC-BY-SA unless otherwise noted.