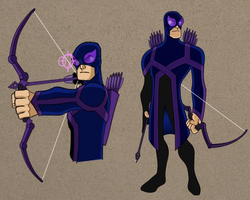 Hawkeye and Mockingbird had an on-and-off relationship for most of their superhero careers. They had tried having a kid before. All went well up until delivery day, when the baby was miscarried. Distraught, the parents vowed they'd never try again. But they did, and after a while, Mockingbird was pregnant again. On delivery day, the baby was born, alive and healthy, and he was named Robert, because his nickname, Bobby, matched his mother's nickname (Barbara- Bobbi). They swore that he would never find out about his dead sibling.

Upon his birth, both Hawkeye and Mockingbird retired from super-heroics. The child had Hawkeye's personality, and he was disappointed that two ordinary humans capable of taking down supervillains had retired just to raise him. He insisted that they could do both, but they just weren't interested in super-heroics anymore. From childhood, Bobby was raised learning hand-to-hand combat and archery. He began forming a plan to join the Avengers, once he had learned enough archery. He knew this would work, as the team only had an analogue to Captain America. He felt the Avengers were useless without an archer.

One day, footage of the Super-Skrull army passed through the TV, and news of the Avengers captured inside. Bobby decided that he would join the new Avengers team to rescue them. His parents attempted to stop him, saying that he wasn't yet on a "Super-Skrull level." He ignored his parents' pleas. He designed a costume, took his father's weapons and his mother's staff, and set out to join the Avengers to prove he was right. He immediately was accepted, and was soon on the ship to give the Skrulls a piece of his mind.

Robert has peak human senses, above-average agility, and great knowledge of combat. He is also a fantastic archer.

Equipment: Longshot utilizes his father's bow, arrow, and quiver. He also possesses a duplicate of his mother's battle staff that can split in half. The mask enables him what he calls "energetic calculating", as well as the ability to see in any environment.
Transportation: None known.
Weapons: None known.

Retrieved from "https://marvelcomicsfanon.fandom.com/wiki/Robert_Barton_(Earth-1175)?oldid=59669"
Community content is available under CC-BY-SA unless otherwise noted.