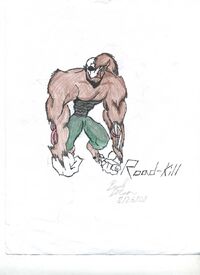 Charles "Chuck" Farley was born in the town of Rodessa, Louisiana during the 1940s. Between his birth and 1956, Chuck was the pride of the town, doing community service, being an honor roll student, a star athlete, and just being an all-around beloved kid. His widowed mother loved him dearly, as did the rest of the town, until the day when his latent mutant genes were activated and he became a feral creature. Still retaining his intellect and personality, but frightening all whom he approached, Charles was captured by radical anti-mutant townspeople and tortured in the most gruesome ways, ending when one of the young teenagers took his pickup truck and continuously ran back and forth over Charles' torso, all the while his fellow townspeople holding him down and forcing him to suffer his fate. Finally "dying" from his immense trauma, he was dumped into a nearby swamp by some of the local boys, where he stayed for the next half century.

Retrieved from "https://marvelcomicsfanon.fandom.com/wiki/Road-Kill?oldid=255546"
Community content is available under CC-BY-SA unless otherwise noted.