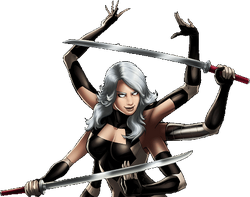 First appearance
Can Be Tamed

Spiral was originally the human named Rita Wayword, Aka Ricochet Rita, a professional stuntwoman who befriended Longshot when he first appeared on Earth.

The story of how Rita became Spiral is a paradox: Rita was attacked by her evil, future self which led to her meeting Longshot and falling in love with him. When Longshot sought to return to his home dimension, the Mojoverse, the lovestruck Rita went with her boyfriend, only to watch Longshot fail and be captured alongside him by the dimension's evil overlord, Mojo. Longshot was promptly mind-wiped to forget all about Rita, while a much worse fate was left for Rita herself.

After holding her prisoner for several years, Mojo forced his chief scientist, Arize, to perform extreme physical and mental body modifications onto Rita to recreate her into a loyal subordinate. These experiments left her with six arms (some of which are robotic), turned her hair gray, and drove the young woman insane through forcibly evolving Rita's mind to the point that she could see into other dimensions that were used for time-travel/teleportation. He also trained her in the dark arts of magic and body modification, so that she could use these skills to mutilate others like Mojo had mutilated her. Finally, in a cruel act of manipulation, Mojo sent Spiral back in time to set into motion the events that led to her former self becoming Mojo's prisoner and become Spiral by attacking her past self.

Now in the past, Spiral found herself stranded on Earth by Mojo for failing to kill Longshot and Rita. She also ran the "Body Shoppe", which sells alien cybernetic parts to amputees and others who see the power of cybernetic limbs.

Along with Mojo, Spiral played a role in Psylocke becoming Asian. Originally, it was believed that the two literally transformed Psylocke from being British to being Asian, but it was discovered that Spiral (without Mojo's involvement) transferred the mutant's mind into the body of the Asian assassin Kwannon.

Even though she was a loyal servant of Mojo, Spiral deeply resented Mojo's crass manners and cruelty towards her. In particular, Spiral has been known to go against Mojo's orders and attack Longshot out of psychotic need for revenge for his seduction on her and how her love for him led to her transformation into the being she is today. As such, Mojo has been known to leave Spiral stranded on Earth (since Spiral required Mojo's power to travel between dimensions safely).

Spell Casting: Spiral has powerful mystical abilities. With gestures or dance moves, she can teleport herself and numerous people across great distances. Teleportation and powerful spells require more complicated dance moves. Spiral's spellcasting powers can be triggered through small hand gestures of her many hands. Spiral often incorporates knives and swords into more complicated spells. Spiral can also disguise herself through her magic. Spiral can open gateways between dimensions and travel through time, though it has been implied that she sometimes requires Mojo's help to successfully teleport from one dimension to another. Currently, her trans-realities powers have been cancelled by Mojo, and she can only teleport on Earth-1010 where Mojo dumped her.

By using magic, Spiral can:

Possession Immunity: Spiral's mind seems to be immune from possession. When Rogue attempted to steal Spiral's mind and powers, Spiral stole Rogue's instead, laughing that she had danced in many people's souls. Nocturne was fooled by Spiral into thinking Spiral had been possessed while Spiral remained in control.

It was also established that Spiral is aware, through unknown mystical means, whenever a person speaks her name.

Spiral is a highly skilled hand-to-hand combatant and sword fighter. Her six arms are fully coordinated, giving her great dexterity and athletic ability. However, Spiral will often lose to less powerful opponents due to tendencies of overconfidence, toying with her foe for too long, or becoming distracted.

Spiral demonstrated highly developed skills in cybernetics and genetic manipulation which she has used to turn humans into powerful cyborgs at her Body Shoppe.

Superhuman with an unknown upper limit.

Retrieved from "https://marvelcomicsfanon.fandom.com/wiki/Rita_Wayword_(Earth-1010)?oldid=184150"
Community content is available under CC-BY-SA unless otherwise noted.