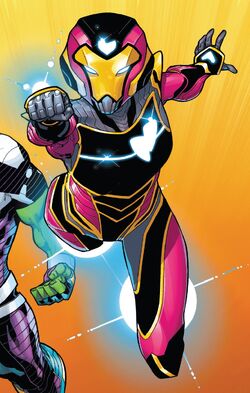 You've always had a heart of iron, Riri. That shows that you're ready to risk your life to protect your loved ones.

Rihanna Robyn "Riri" Williams was born to Demetrius and Rondelle Williams in Brooklyn, New York. After the death of her father, her genius-level intellect began to develop at an early age and it caught the attention of her mother. Like, Tony Stark, Riri began to take interest in electronics, building different kinds of gadgets from anything she can lay her hands on. Rondelle sent Riri to a special school where gifted children were allowed to branch out their craft. Due to her second passion for design, both for architect and fashion, Riri began to create blueprints that would give Stark a run for his money.

Her intelligence would have her enrolled in Brooklyn Visions High School by her mother who saw her becoming a famous inventor and industrialist. During her first year, she met her best friends Miles Morales and Ganke Lee, starting their long-lasting friendship.

Rise of the Onyx Spider

Riri was one of the only people to know about Miles' spider powers and she was the person to encourage him to become a hero like Spider-Man, but Miles rejected to the idea. However, she along with Garrick and Miles' family meet up with him when his father was shot by some gang members, only to die moments later and Riri decided to help Miles seek justice. After looking at the pictures of Spider-Man, his suit mainly and its functions, Riri not only created a pair of web-shooters but designed a red and black suit for Miles while helping him train to become the Onyx Spider to take on the gang members.

The Birth of Ironheart

Meeting Tony Stark and the Avengers

Retrieved from "https://marvelcomicsfanon.fandom.com/wiki/Rihanna_Williams_(Earth-7090)?oldid=273714"
Community content is available under CC-BY-SA unless otherwise noted.