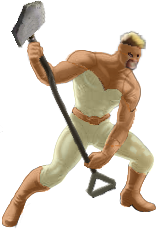 When Ricky Calusky discovered that he was the illegitimate son of the infamous Piledriver from the Wrecking Crew, he decided to runaway from his grandparents' home and join his father in a life of crime. Piledriver agreed to tutor Ricky under the motive of training a new recruit to take over upon his own retirement.

Armed with a shovel enchanted with the same Asgardian Magic as Wrecker's Crowbar, Ricky became known as Excavator. Unfortunately his first bank-heist was thwarted by the Runaways, who believed they were saving Ricky from his criminal father. The Runaways quickly defeated the Wrecking Crew with Excavator shattering his shovel to pieces on an unharmed Molly Hayes.

Eventually, Excavator relocated to Bagalia and joined the Young Masters of Evil under Coat of Arms' leadership. With his enchanted shovel repaired, Excavator willingly became one of Bagalia's enforcers.

It was in Bagalia that Ricky met Death Locket after she and the others Murderworld survivors pummeled the Young Masters on their way to save Cullen Bloodstone. The pair appear to have a mutual attraction, and Excavator has made efforts to become close with Death Locket.

Ricky Calusky was born human with no metahuman abilities. However, after gaining his shovel enchanted with the same Asgardian Magic as Wrecker's Crowbar, Ricky became the Excavator and gained powers similar to those of the Wrecking Crew, including:

Retrieved from "https://marvelcomicsfanon.fandom.com/wiki/Ricky_Calusky_(Earth-1010)?oldid=243098"
Community content is available under CC-BY-SA unless otherwise noted.