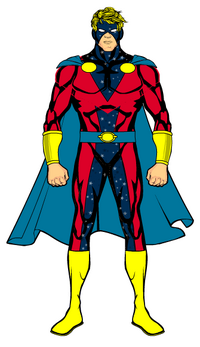 Captain Mar-Vell and Ms. Marvel fell in love as soon as she saw him. It was hard for them, since they both came from completely different places and lives, but they made it work. Eventually, Captain Mar-Vell settled down on Earth, and they had a son: Rick Danvers.

Life was pretty good for them, until Rick's powers manifested around the age of 5. Rick would start levitating and teleporting uncontrollably, and this made everyone afraid of him. So, Carol quit her job and the Avengers, and Mar-Vell did the same, and Mar-Vell said that he knew someplace where they should be welcomed: the Kree Empire. Having no other choice, Rick and his family joined the Kree military, and Rick Danvers had no memories of Earth; the only reminder was his Kree name R'ck. He was made a device by Kree scientists that gave him control of his powers, and he practiced with them in hopes of eventually controlling them.

One day, people on the Kree homeworld started panicking. A huge ship was docked in the sky right above their world. It belonged to the Super-Skrulls, and word was spreading that it held the Avengers. Stating that he had to help, he flew into the sky. He met up with the new team of Avengers, and helped them fight the Skrulls. He was able to free some of the old Avengers. After the ordeal was over, his parents told him everything that had happened to him. He was then offered a position in the Avengers. He accepted.

As a Kree/Human hybrid, R'ck has these powers:

Flight: Marvel-Man has the ability of self-propelled flight.

Teleportation: Marvel-Man can move between locations without covering the distance between them.

Cosmic Awareness: Through cosmic awareness, Marvel-Man can sense an opponent's weakness, and has limited precognition.

Superhuman Agility and Reflexes: Marvel-Man is more agile than most humans.

Energy Absorption: R'ck can absorb energy to enhance his strength and powers.

Electromagnetic Powers: These powers lie dormant in Rick, but these are the powers his mother had as Binary.

R'ck was trained in all Kree martial arts by his father.

Retrieved from "https://marvelcomicsfanon.fandom.com/wiki/Rick_Danvers_(Earth-1175)?oldid=134540"
Community content is available under CC-BY-SA unless otherwise noted.