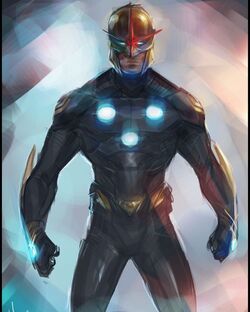 It's my duty and my responsibility to protect the galaxy. That includes the Earth... so why do I feel so helpless?

Richard Rider was recruited into the Nova Corps after washing out of basic training. He was then trained for years on the planet Xandar, where he became dedicated to protecting the galaxy. He even eventually became wrapped up in the group of former criminals to superheroes, the Guardians of the Galaxy, who he started splitting his time with between the Nova Corps.

He and the Guardians later answered Captain Marvel's call for help when Ultron covered the Earth in a Vibranium force field. Their efforts to destroy the force field proved hopeless, and eventually the Guardians moved on. However, Nova felt it was his responsibility to do what he could do help and tried recruiting other Novas to bring down the force field, but even they proved unable.

Since then, Nova has begun spending most of his time with Captain Marvel on the Alpha Flight Space Station, only leaving to fulfill his mandatory duties as Nova.

Retrieved from "https://marvelcomicsfanon.fandom.com/wiki/Richard_Rider_(Earth-9999)?oldid=246113"
Community content is available under CC-BY-SA unless otherwise noted.