Under Construction. Do not edit, write or touch. 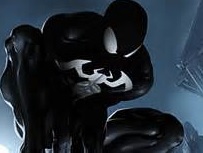 With this power, I sought to avenge my brother's death by protecting the lives of others. He always stood for the value of responsibility and so do I. I have a responsibility to use my powers for the good of mankind.

Richard Parker and Carl Brock, two scientists at Oscorp once dreamed of inventing the cure for cancer until an accident occurred that soon created something much more than they had imagined-the symbiote.

Only soon after, Richard Parker realized the symbiote had side effects and began to tamper with his mind. Richard Parker knew he had to keep the symbiote suit to good use, so he created a symbiote stabilizer at Oscorp, which he would wear as a vest underneath his suit so his mind wouldn't get effected.

However, it did not go so well as he had planned. Carl Brock was introduced to the symbiote, but unlike the other time, he was unable to control it. The symbiote mixed with his bloodstream, giving him the appearance of the mass-murderer villain known as Carnage. After Venom unfortunately had to defeat him, he was sent to Ryker's Island and was silenced for years, only to break out again.

Years after the defeat of Carnage, Richard stopped fighting for a while as Venom and continued his work at Oscorp. With his lab partner, Doctor Connors, they created a cross-genetics formula and as first use of this formula, they used it to regrow Dr. Connor's arm. The regrowth had been successful and it was introduced to the world.

Meanwhile, Peter Parker and Harry Osborn came into contact after Harry had returned from boarding school. Peter soon realized Norman Osborn was dying, and trying to pass on the heroic act that his dad once gave to the city, he vowed to help Harry's father. Mistakenly, he soon became the "Green Goblin" after a terrible lab accident. After a terrible argument with his father and his mind corrupted by becoming Green Goblin, he used his powers for terror and destruction. Richard soon learned the identity of the Green Goblin and learned that he had to take down his son.

After the terrible battle between father and son, Peter was sent to Ravencroft Institute to rehabilitate from his goblin-like state.

In another year or so, SHIELD recruited Richard Parker for the Avengers. Since then, he has been a proud member fighting side by side with Thor, Hulk, Captain America, Black Widow, Hawkeye and Iron Man. More to be added!

With the powers of the Symbiote, Richard Parker possesses the strength to lift ten times his weight. He also has the normal strength of a Human, but one of a very fit one.

Retrieved from "https://marvelcomicsfanon.fandom.com/wiki/Richard_Parker_(Earth-5919)?oldid=204662"
Community content is available under CC-BY-SA unless otherwise noted.