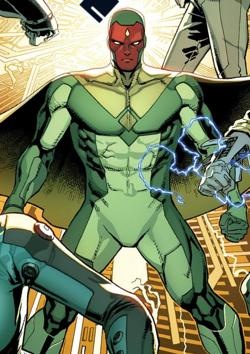 After the death of Howard Stark, A 29 year old Tony Stark created Vision a Lifeless robot that he had no use for until he discovered a he could imprint his fathers brainwaves in Vision so that his father would be alive. Tony's conscious told him that Howard would not want this, but Tony still uploaded his father. Vision awoke and did not posses his father's qualities and traits, but only his knowledge.

When Norman Osborn set a hit on Tony Stark A.I.M were the first ones there. Crossbones blew up Starks House while looking for him. Winter Soldier then informed Crossbones that he was in Stark Tower the two raided Stark Tower but instead of killing him stole the Vision suit and left.

Vision was being programmed by A.I.M when a group of Drones broke in. The Scientists programming Vision were knocked out and the Drones grabbed Vision. They took him to their leader The Leader or Samuel Sterns. Sterns imprinted his brainwaves in Vision and prepared to use him as his Super-Weapon until The Avengers broke in and saved Vision after Tony tracked him down.

The Vision possesses a number of superhuman powers ultimately derived from his artificial substance and metabolism. The Vision's android body is functioning replica of a human body containing analogues to virtually all human organs, blood, and tissue, composed of an unrevealed synthetic organic-like substance. This substance mimics all the functions of human tissue, but is several times as strong, durable and resilient.

Retrieved from "https://marvelcomicsfanon.fandom.com/wiki/Richard_Nomas_(Earth-2226)?oldid=119926"
Community content is available under CC-BY-SA unless otherwise noted.