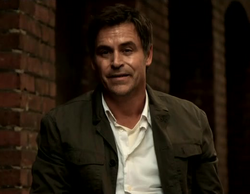 In 1990, Agent Richard Lumley was part of a S.H.I.E.L.D. retrieval team along with Agent Linda Avery deployed to the Hunan Province of China to recover an 0-8-4. When they arrived, they found the previous S.H.I.E.L.D. presence had been wiped out, save for the mortally wounded senior officer, who was still clutching onto the item - a baby. But sometime after they returned home, the members of Lumley's team started dying off, mostly likely because of whatever inhuman force that wanted the baby. While Agent Avery took care of the baby, Agent Lumley fled to Mexico City to hide from his pursuers.

Twenty-four years later, Lumley's years of living off the grid were over as he was caught in a teenager's selfie, leading Agents Phil Coulson and Melinda May into tracking down Lumley to get him to tell them what he knew about that baby, now an adult and going by the name Skye, and he briefed them on what happened in China. Afterwards, they decided to relocate Lumley. But before parting ways, Lumley warned them to stop digging for the truth and to stay away from Skye, stating that death follows her.

Retrieved from "https://marvelcomicsfanon.fandom.com/wiki/Richard_Lumley_(Earth-1010)?oldid=98275"
Community content is available under CC-BY-SA unless otherwise noted.