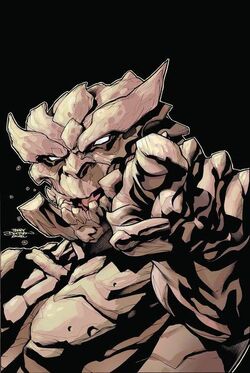 Brown, None (as A-Bomb)
Unusual Features
While in his transformed state, Jones takes on a superhumanly powerful form resembling that of the Abomination
Status
Citizenship

Richard Milhouse "Rick" Jones was orphaned at a young age, and after being expelled from several orphanages for disciplinary reasons and another fact that he was secretly a latent mutant (due to several lab test results that he possesses the X-Gene), he was recommended into a state institution for young mutants known as the Xavier's School for Gifted Youngsters. A troubled and rebellious youth, Jones would eventually run away from his last orphanage only the day before he was supposed to be transferred to the mutant-based settlement in Westchester County, New York. He spent the first half of his teens drifting from town to town throughout the Southwest, trying to avoid the juvenile authorities, and doing menial work when he could get it.

At early age of 16, he got his driver's license and managed to save enough money to buy a used car. Overhearing a teenager dare a friend to ride out with him on the dockyard where Hulk was unexpectedly wreaking havoc. Later on, Rick Jones would meet Bruce Banner at Culver University, and remained in contact with him following Banner's incident that made him become a fugitive, becoming the latter's associate. The United States Army watched Jones' movements in case he contacted and helped Banner before eventually the Bio-Tech Force Enhancement Project would recruit him, only days after the Battle of Harlem between the Hulk and the Abomination, which concluded with Banner living a life on the move again as a free man.

As a new recruit and part-time consultant of the Bio-Tech Force, Rick later went to research the Abomination's biological nature in his cryogenic cell located at Barrow, Alaska, now in S.H.I.E.L.D.'s custody, where few enhanced individuals that were considered threats were detained and researched by the peace-keeping agency. Rick was trying to figure out a way to replicate the Abomination's essence and help the facility's scientist to return him back to his human form, in order to prevent Blonsky from causing worse mess within the prison complex and diminish any possibility of him escaping his cell.

For the next few weeks, Rick's efforts as a young genius in helping the superior scientists in their main objective to revert Blonsky into human form were quite progressive and truly helpful, only for all of it to end on the very day the prison facility was suddenly infiltrated by Hydra sleeper agents during the infamous Hydra Uprising and in the ensuing attack, Rick was exposed to both gamma radiation and the Abomination's modified blood samples. With this incident, Jones' mutation unexpectedly unlocks along with the altering effects of gamma rays have subsequently transformed him into a gamma powered being that would eventually be called by the authorities and the media as the A-Bomb. However, in the midst of his transformation, Rick was initially shocked of what he had become, rendering him to leave S.H.I.E.L.D. and forces himself into hiding while he tries to find his way to his old friend, Bruce Banner, without having to be detected and subsequently caught by the authorities whom he barely trusted to begin with.

Mutated Homo Superior Physiology: At birth, Rick was discovered to be a latent mutant, meaning that despite carrying the X-Genes, his powers have yet to manifest unless a chemical reaction affects his system, powerful enough to unlock his mutation. After being exposed to a weapon powered by gamma radiation designed for use against the Abomination, Jones' mutation was finally unlocked and was also altered by the radiation to a higher rate. As a result, Jones can transform into a superhuman form that resembles the Abomination. Jones has demonstrated the ability to transform at will and, when doing so, gains an additional 4 feet 3 inches in height and 1,835 pounds of muscle, bone and connective tissue to his frame. Jones' skin takes on a scaly sort of appearance, his eyes change color and his hair disappears.

Retrieved from "https://marvelcomicsfanon.fandom.com/wiki/Richard_Jones_(Earth-61615)?oldid=271807"
Community content is available under CC-BY-SA unless otherwise noted.