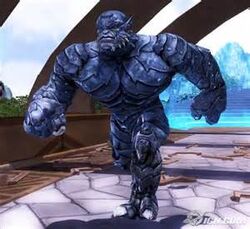 Brown, None (as A-Bomb)
Unusual Features
While in his transformed state, Jones takes on a superhumanly powerful form resembling that of the Abomination.
Origin
Origin
Human mutated by the DNA of the Gamma-powered Abomination
Place of Birth
Scarsdale, Arizona
Creators

Little is known about A-Bomb's life before the Civil War. It can be assumed to be similar to his mainstream counterpart.

A-Bomb was one of many people around the world who got infected by the nanites and controlled by the Fold. He participated in the Siege of Wakanda, teaming up with Justice to defeat the Ultimate Alliance. He was defeated anyway and was later freed from the Fold.

Jones is an accomplished gymnast and hand to hand combatant. Jones has a thorough knowledge of Judo and Karate and has even had some training from Captain America himself. He also has exceptional musical talent and has proven himself to be a skilled songwriter, guitarist and harmonica player.

Retrieved from "https://marvelcomicsfanon.fandom.com/wiki/Richard_Jones_(Earth-6109.2)?oldid=123316"
Community content is available under CC-BY-SA unless otherwise noted.