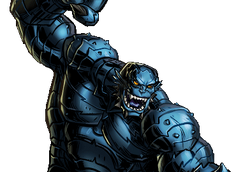 Brown, None (as A-Bomb)
Unusual Features
While in his transformed state, Jones takes on a superhumanly powerful form resembling that of the Abomination.
Status
Citizenship

Richard "Rick" Jones was orphaned at a young age, and after being expelled from several orphanages for disciplinary reasons he was placed into a state institution called Tempest Town. A troubled and rebellious youth, Jones soon came to the attention of the institution's chief administrator who smashed his guitar, a gift from his late father, and then had him severely thrashed. Soon afterward, Jones ran away from the institution. He spent the first half of his teens drifting from town to town throughout the Southwest, trying to avoid the juvenile authorities, and doing menial work when he could get it.

At age 16, he got his driver's license and managed to save enough money to buy a used car. Overhearing a teenager dare a friend to ride out with him on the dockyard where Hulk and Red Hulk were fighting. Jones got into the Dark Avengers jet, tased Dark Ms. Marvel and helped the Hulk escape, earning the respect and gratitude of Dr. Banner as well as the Avengers'

During Dr. Samson's experiment, Rick Jones jumped in the way of a Gamma ray beam fired by Abomination at Bruce Banner, turning into a Gamma giant.

Physical Transformation: After being exposed to a weapon powered by gamma radiation designed for use against the Hulk, Jones was mutated by the radiation. As a result, Jones can transform into a superhuman form that resembles the Abomination. Jones has demonstrated the ability to transform at will and, when doing so, gains an additional 4 feet 3 inches in height and 1,835 pounds of muscle, bone and connective tissue to his frame. Jones' skin takes on a scaly sort of appearance, his eyes change color and his hair disappears.

Jones is an accomplished gymnast and hand to hand combatant. Jones has a thorough knowledge of Judo and Karate. He also has exceptional musical talent and has proven himself to be a skilled songwriter, guitarist and harmonica player.

Retrieved from "https://marvelcomicsfanon.fandom.com/wiki/Richard_Jones_(Earth-1010)?oldid=128056"
Community content is available under CC-BY-SA unless otherwise noted.