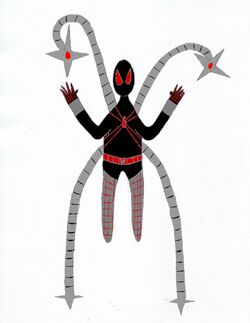 Richard “Richie” Brancale was the son of Doctor Octopus and the Stunner. He was conceived in the virtual reality plane before his mother entered a coma, but born in-between realms. He was put up for adoption, and thus hated his parents. He was adopted by an unknown couple, and found a life of trouble: nothing more than mischief, but it still satisfied him. Hearing about his mother’s coma, he decided he did not hate his mother, and attempted to stop her once she managed to escape it. However, he was crushed before he could get a chance to reason with her, losing the use of his legs. He was fitted with prosthesis (enhanced with StarkTech due to the fact that Stunner was the villain of a fellow Avenger, and Tony felt sympathy), but the deepest paralysis was inside Richie’s confidence.