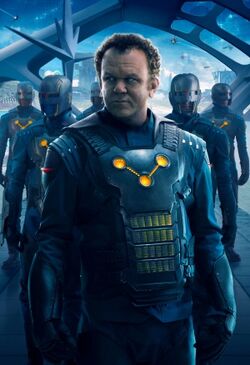 Rhomann Dey was an officer of the Xandarian Nova Corps. He arrested Peter Quill, Gamora, Groot and Rocket when they caused mayhem on Xandar. After he and Denarian Saal processed each criminal, they sent them off to the Kyln.

Dey was later contacted by Quill, who urged him to warn the Nova Corps that Ronan the Accuser was in possession of an Infinity Stone and was headed to Xandar, but the Ravagers were ready to defend the planet. When he told this to Nova Prime Rael, he admitted that he believed that Quill was sincere in his warning.

Following the Guardians of the Galaxy's defeat of Ronan, the newly promoted Denarian Dey showed them to the rebuilt Milano. He then thanked them for saving his family. He also mentioned that their criminals records have been expunged, but future criminal activity will not be tolerated. Quill assured Dey that he will keep his friends in line. Afterwards, Dey reunited with his wife and daughter.

Retrieved from "https://marvelcomicsfanon.fandom.com/wiki/Rhomann_Dey_(Earth-1010)?oldid=125117"
Community content is available under CC-BY-SA unless otherwise noted.