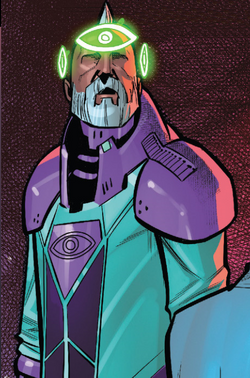 I do not need eyes to see the evil emanating off of you.

Revos the Overseer has been the longest reigning High Priest of the planet Spyre. After using his Tower of Over-Site to spy on the planet Earth, he became enamored with the heroes known as the Fantastic Four, and how they were gifted with their abilities through cosmic radiation.

Revos and his partner, Krumson, began studying how to harness the cosmic rays, and eventually turned them on themselves. While Revos was given the ability of sight beyond sight, Krumson was mutated into a lizard-like creature.

The two then hatched the plot to use cosmic radiation to create their own team of superheroes, and even villains for them to fight against. This team ended up being known as the Unparalleled, who were worshiped by the people of Spyre, while Krumson was forced to lead a monster army from the underground.

While the Unparalleled mostly remained on their home planet, one of their more cosmic adventures led to them discovering a horde of Chitauri deserters who had used the Mind Stone to evolve themselves past the mindless creatures that Thanos had intended them to be. After a brief battle, the Overseer was able to claim the Mind Stone for himself, embedding it in his armor to even greater enhance his powers.

This mission was kept under wraps, but still inevitably attracted the attention of Eros and Odin. Having glimpsed into the mind of Thanos using his Infinity Stone, Revos agreed to join Infinity Watch and keep the Mind Stone safely guarded on Spyre.

For the next several years, the Overseer believed that Infinity Watch had completed their mission, and he had little else to worry about. But of course, Thanos had discovered the Mind Stone's location, and began besieging the planet of Spyre.

With the Unparalleled and the Monster Army working together, they were able to put up a valiant fight against Thanos and the Black Order, but his one Infinity Stone was no match for the combined might of the Soul, Power, and Time Stones, which Thanos already possessed.

It became clear to the Overseer that Infinity Watch had failed, and he used his last remaining vestige of energy to command the Unparalleled to begin evacuating the planet. With that, Thanos ripped his armor from his body and claimed the Mind Stone, before stomping his foot into Revos's chest, killing him.

Retrieved from "https://marvelcomicsfanon.fandom.com/wiki/Revos_(Dimension_0)?oldid=263153"
Community content is available under CC-BY-SA unless otherwise noted.