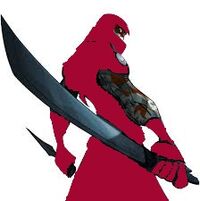 Single
Occupation
Crime lord, Assassin, Leader of the Hand
Education
Ninja from birth.
Origin
Origin
Takeshi was a member of the Hanzō Clan before he betrayed them and tried to kill Vanessa. He was transformed by a demon sword into the villain name Revenge of the Hand.
Place of Birth
[[Somewhere in Japan]]
Creators

Betrayal! Ha, If I can't be Leader of The Hanzō Clan then I will rule The Hand.

Takeshi was born Hattori Takeshi or Takeshi Hattori in the American way of writing names. He was born to a secret clan of ninjas called "The Hanzō Clan" hidden in Japan. Like all the descendant of Hattori Hanzō, he was born with limited precognition a common trait among the Hanzō bloodline clan members. One day an outsider was taken to their hidden village, she was a six year old who was orphaned. Takeshi was eight and something about this strange shy girl made him worry. He started bullying her and trying to control her. As they got older, the girl called Vanessa proved to be extremely bright and became a very skilled martial arts, she quickly began to surpass Takeshi's abilities and was the Hard Master's choice to succeed him as the head of the clan. When Vanessa's powers started to develop, Takeshi became enraged. Before Vanessa came to Takeshi's village, him was next in line to become the successor of the Hanzō Clan. He saw Vanessa as a treat to his growing power.

Takeshi began to secretly search about Vanessa past and her parents. He learns that one was mutant and the other was daughter of Flame - Master of pyrokinesis, the Hand had come to their home to steal young Vanessa at six years old. The father had frozen many of the Hand ninjas before being killed in a fire. The mother escaped with child but not before being hit with a poison dart, the mother died but not before passing Vanessa to one of the Hanzō Clan. Takeshi made his plans to betray Vanessa to the Hand. On Vanessa 18 teen birthday, while she away from the Hanzo Clan in the city, with her two friends both ninjas, Takeshi attacks leading a group of the Hand ninja, himself. Takesh had learned of her secret past and sold her out to the hand who were still looking for her. Takeshi knew he outnumber her 11 to 3, Two attacked her friends but the rest moved to attack Vanessa, herself. They moved with care for the learned from Takeshi that her powers had awaken. When Vanessa started beating the Hand and her friends took out the others, Takeshi yells to bind Vanessa's hands, The hand moves into a more trapping and defend mode. Vanessa and her friends defeat the Hand ninja, Takeshi is killed while trying to stab Vanessa and the Hand leaves as more the Hanzo clan arrived. Because of Takeshi betrayal, he was buried in an unmarked grave in the forest to be forgotten. Unknown to Vanessa or the Hanzō clan, Takeshi would return as villain Revenge.

The Hand found and resurrected Takeshi and place him fully under their control through a magic ritual. Unknown to them, the Hanzō clan had both trained and magically protected all their ninjas from mind control. Before he was full restored, the Beast met him between life and death, the Beast told him of a sword, the BloodSword it was made by the demon, himself. The BloodSword would give him power to rule the Hand if he was worthy. Takeshi awakes with marking on his back and arms and pretends to be under control of the hand leader Junzo Muto. Takeshi gets closer to Junzo Muto moving up the ranks very quickly. Getting Junzo drunk on wine because it wasn't easy to poison the head of the Hand, many have tried and now skulls in a collection. Also, Takeshi didn't want him dead yet but needed knowledge. He learned of the swords rumored location and that Junzo had failed while trying to get it. Also he had learned of Junzo past when he had gain the power of the Iron Fist and lost it and also how he conquered the K'un-L'un. It is here the Takeshi decides he will become the next Iron Fist after he gets the BloodSword.

Hunt for the sword

Takeshi takes 6 lower level ninja with him for the BloodSword. He learns it was hidden in an old mountain cave in the Himalayan region of Nepal. Here they ran into a race of Yeti these Yeti were not like the ones from 21 century, they were advance tech users. Yeti's leader tried to talk them out of going for the sword, for these Yeti could read minds and were the guardians of the weapon, protecting the world from it's evil. Takeshi would hear no more of this and at night they attacked the Yeti, thinking they would caught them sleeping. Takeshi is saved by his precognition just as an ice spear heads for his heart and he moves out the way. Two of his men are dead, the others are fighting the Yeti. Seeing that they were going to lose, he made a dash towards the sword, he feel a strange pull. The other men were overpowered and killed but not before Takeshi hand fell on the BloodSword. Revenge was born, a red light filled the cave and the battlefield. The Yeti ran back except for their leader who went to face this new great threat. Takeshi had changed, he now had red eyes, gray skin and the Tattoos now glowed on his body. He was not longer wearing his winter gear, just his red hand ninja suit. His body was no longer affected by the cold weather. The Yeti leader felt the evil and bloodlust coming from both the sword and man as if they were one being. Revenge attacked with superhuman speed, pushing back the taller stronger looking being. The yeti leader tries to take his head with a sword of ice stronger than steel. Once again Revenge's precognition saves his head and he cuts off the leader's hand. As the Yeti blood hit the BloodSword and Revenge, Revenge feels weakened that is when the other Yeti start to charge in. Revenge flees with the sword before his superhuman strength and speed leave him. Weakened and almost froze to death in the Himalayan mountain, he is found by a villager and taken back to this village. The BloodSword is taken out of Revenge's hand, that night under control of the BloodSword the villager kills his family and himself handing the sword to Revenge. Feeling the power return to him, Revenge kills everyone in the village to get stronger, learning blood makes the sword stronger but only the yeti blood makes it weaker.

Leader of The Hand

Revenge challenge the leader Junzo Muto for leadership. Junzo attack Revenge with fire for even Junzo could feel the evil of the sword calling for his blood. His laughter die in his throat as an unharmed naked Revenge walk out the fire with curse sword in hand. Revenge moved with blinding speed to attack Junzo but Junzo teleported behind him at stab Revenge with his sword in the back. Revenge fell to the floor, thinking he won Junzo turn away only to loss his head to Revenge who already healed from the attack. Revenge then took his clothes and his leadership of the Hand.

Revenge met his cadre of the hand and promised them that he planned to conquer K'un-L'un and with that move, The Hand from the shadows and into the light and thus be feared everywhere. When K'un-L'un appeared the Hand were ready to attack. Revenge head for the Great Hall, where he introduced himself to Yü-Ti and the Dragon Kings. Yü-Ti sense the evil of this Omi before them dress as a man and had the Dragon Kings attack. Revenge manage to defeat his many attackers the Dragon Kings who had transform into a dragon to attack him and imprisoned Yü-Ti. Revenge kept Yü-Ti alive since he held some secrets to K'un-L'un.

The only power Takeshi was born with was precognition a common trait among the Hanzō bloodline clan members. Powers gain when using the BloodSword.

Revenge possesses the normal human strength of a man his age, height, and build who engages in intensive regular exercise. However with the sword, his strength boosted to superhuman level.

Retrieved from "https://marvelcomicsfanon.fandom.com/wiki/Revenge_(Earth-928.2)?oldid=51723"
Community content is available under CC-BY-SA unless otherwise noted.