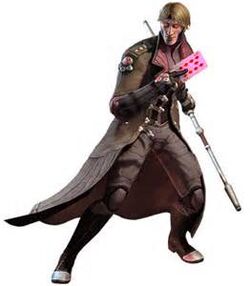 Little is known about Gambit's life before the Secret War. It is assumed to be similar to his mainstream counterpart.

Gambit was one of the X-Men, and fought alongside Wolverine and Storm many times in the past. During one of Apocalypse's attacks he was transformed into the Horseman Death, but he got better. At one point he owed a favor to Nick Fury, which the Colonel called in when he had the mutant attack Latveria in an unsanctioned war. Gambit was put on Bravo Team, and lost contact with Fury, forcing him to send Wolverine and Spider-Man to re-establish radio communications. Bravo Team continued the attack on Castle Doom, and battled the Tinkerer in his secret lab. In the end the lab was destroyed and Gambit, as well as the other super heroes, escaped the destruction of the castle. Gambit would later become a White Star member during the Superhuman Civil War and the Nanite Fold's invasion.

Gambit was one of the known participants during the Secret Invasion.

For some time, he was unable to completely control his powers, which is why he had Sinister remove a piece of his brain stem. Gambit's powers have no effect on anything unless he touches it. Gambit's eyes are extremely sensitive to light.

Retrieved from "https://marvelcomicsfanon.fandom.com/wiki/Remy_LeBeau_(Earth-6109.2)?oldid=122530"
Community content is available under CC-BY-SA unless otherwise noted.