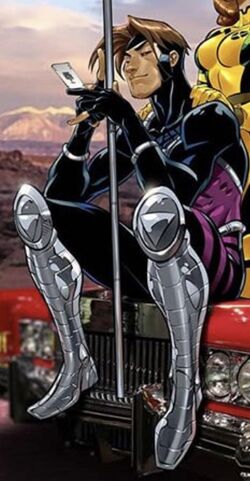 I hereby call this meeting to elect me, Gambit, as the official leader of X-Force into order.

Ever since he was a child, Remy LeBeau has been trained to use his powers to rob people and cause mayhem so that the Thieves Guild could accomplish bigger and bigger heists. He believed that if he continued to do whatever they asked, one day he would earn his father's love.

Once he reached adulthood, Remy realized he had been manipulated and abandoned the Thieves Guild, taking on the codename Gambit to work as a thief and assassin for hire. Eventually, he was hired by Magneto to break into the Xavier Institute on Krakoa and steal information on Cerebro. He became the first person to make it in and out of Krakoa without being captured, but ended up getting followed by Wolverine. The resulting battle left Gambit with a certain disdain for Wolverine, and was offered a spot on the Brotherhood to take his revenge.

He agreed to join the team, so long as Magneto continued to pay him. This arrangement worked out for some time, until Gambit started to become uncomfortable with Magneto's level of radicalism. This led to him turning his talents towards X-Force, and offered to sell information about the Brotherhood's plans to them. However, Professor Xavier and Jean Grey simply pulled the information from his mind. He was impressed by this trick, and decided he could learn from them.

Since then, Gambit has discovered he quite enjoys using his powers for good, but still found himself selling his talents, believing he needed to make money. However, it wouldn't be long until they explained to him that he didn't need to support himself so long as he lived on Krakoa. Hesitantly, Gambit began to feel at home on the island and started to develop friendships with his teammates, even Wolverine. The two of them found themselves often getting drunk together and not talking.