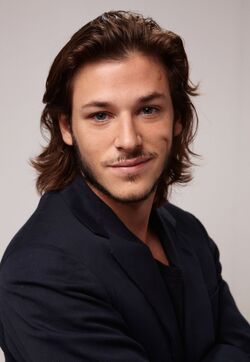 Hello, New York! Are you ready to rock and roll?

Geostrike was born Reinhardt Ulrich Hozhauer-Marx in Munich, Bavaria, Germany. His parents abandoned him when he was only six years old and he was taken to an orphanage where he was taken under the care of many nurses who became mother figures to him.

As he grew up, his mutant powers began to develop, his ability being able to manipulate and shape earth. Reinhardt was shocked at first but began to embrace it fully, showing the other kids in the orphanage.

However, one day, Reinhardt witnessed one of his friends getting bullied by a group of older kids and when he confronted them, he took a hard blow in the stomach. This caused Reinhardt to angrily retaliate, using his terrakinetic powers and unleashed a flurry of rocks, hitting every single bully, nearly killing them. Looking around, he could see every child staring at him in shock and fear and everything changed for him.

Since that incident, Reinhardt was avoided by many children and some of them called him a monster, much to his hurt and this prompted him to leave the orphanage, despite some of the kids trying to talk him out of it. Reinhardt managed to sneak into an airport, avoiding any guards that were standing watch, and made his way to New York City in America, where he found himself surrounded by people who came from all around the country.

With no money or anywhere to go, Reinhardt spent most of his time pick-pocketing from people to help him survive while he began to develop his powers. All of that changed when he met Professor Charles Xavier, when he was running from a man after taking food from a corner store and used his powers to form a stone wall from the ground. Instead of being taken to the police, Reinhardt was taken under the Professor's wing, and was enrolled in the Xavier School for Gifted Youngsters, where he began to fully develop his powers, not to mention make new friends who were mutants as well.

After graduating from the Xavier Institute, Reinhardt spent most of his years being a vigilante while taking odd jobs until Professor X recruited him into the New X-Men, and along the way he became interested in Cameron Raymond romantically, who became smitten with Reinhardt after meeting him, and the two dated inside and outside the team.

During his time on the team, the New X-Men, along with Professor X, Cyclops, Jean Grey, and Storm were involved in a scuffle against the military under the command of Sgt. Harold Calhoun, who wanted to eliminate all mutants and bring 'peace' to the Earth. Reinhardt was shot multiple times after pushing Cameron out of the way, much to the half-Atlantean's horror and sorrow. With his dying breath, Reinhardt thanked everyone for accepting him, and told Cameron that he loved him, dying in his arms. He was buried in the Trinity Church Cemetery in New York City, and Cameron visited him often after his death.

Terrakinesis: Reinhardt has the ability to manipulate and shape earth from the ground. This gave him the ability to create weapons, shields, and armor. He can even project spikes from the earth as well as earth projectiles and even create earthquakes.

Superhuman Strength: Through his terrakinetic ability, Reinhardt was granted superhuman strength that allowed him to lift a large charter bus with a little to no effort.

Enhanced Stamina: Reinhardt's body was able to sustain massive fatigue without wearing out, giving him full energy that kept him active through battles.

Equipment: His X-Suit
Transportation: X-Jet
Weapons: None. His weapons are made from earth.

Retrieved from "https://marvelcomicsfanon.fandom.com/wiki/Reinhardt_Holzhauer-Marx_(Earth-7090)?oldid=254237"
Community content is available under CC-BY-SA unless otherwise noted.