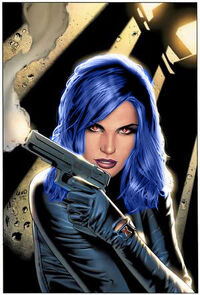 Rei is the clone of Black Widow, created by Hydra attacking the original by to "fight and an Assassin is to send in another".

Madame Hydra treats Rei like a daughter to her, raising her to kill, being used as a weapon.

Technology Manipulation - Manifested as a special form of electrical/telekinetic manipulation, a special form of "Morphing" which allows physical interaction with machines or even a psychic ability that allows for mental interface with computer data.

Enhanced Reflexes - The powers in which one’s reaction skills are drastically enhanced.

Enhanced Combat Skills - The power in which one can achieve powerful fighting skills without the need of special or long-term education.

Retrieved from "https://marvelcomicsfanon.fandom.com/wiki/Rei_(Earth-616)?oldid=194576"
Community content is available under CC-BY-SA unless otherwise noted.