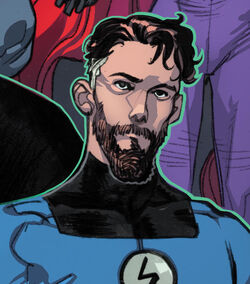 I used to believe I would actually save the world. Now, I just don't know if that's even possible anymore.

Reed Richards led a crew of explorers, including his fiance, Susan, her brother, Johnny, and his best friend, Ben, into space to study cosmic rays. However, overexposure caused the four of them to mutate into beings with incredible powers. They became the Fantastic Four, and for a time, were the world's premiere superhero team.

They would later team up with S.H.I.E.L.D. to help battle Apocalypse. However, after the fall of S.H.I.E.L.D., they joined the resistance team, the Avengers. Reed and Sue became devastated when Johnny and Ben were taken by Apocalypse's forces, and even more so when they discovered Johnny had become the Horseman of Famine.

Reed was perplexed that Apocalypse's scientists were able to solve the dilemma of Ben's mutation, something that Reed never could. He has since become moderately depressed, and opts to remain in the Avengers' home base of Department H, working on his experiments and operating the team from behind the scenes. This has caused some friction between him and Susan, but they know they are all the other has left, and are still always there for each other.

Retrieved from "https://marvelcomicsfanon.fandom.com/wiki/Reed_Richards_(Earth-9999)?oldid=245834"
Community content is available under CC-BY-SA unless otherwise noted.