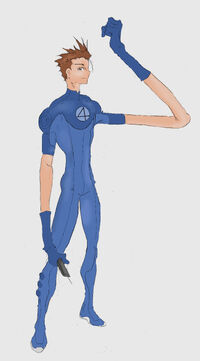 Brown
Unusual Features
When asleep, parts of Mr. Fantastic's body relaxes to the point where they "sag."
Status
Citizenship

"We became something more than human, but we are still the same people..."

Nathaniel Richards and his wife gave birth to their first child, a son named Reed. As a child, he demonstrated remarkable intelligence, well ahead of that of his peers. While his father wanted him to pursue sports, Reed devoted himself to the science instead. His father often found him cannibalizing household appliances in an effort to create something never before seen by man - this in fact annoyed his father.

Reed's heightened intellect naturally made him the subject of ridicule at his school. Fortunately, he managed to become friends with the school's star linebacker, Ben Grimm. Ben generally associated with Reed in order to get help with his biology homework. But he valued him enough to help him against the school bullies. When Reed was seventeen years old, he began developing schematics for a device that could transmit matter across the dimensional plane. This scientific discovery grabbed the attention of the Director of Mainland Technology Development, Dr. Franklin Storm. Storm recommended him for induction into a special government think tank - a program that recruited young geniuses in the hopes of creating the scientific leaders of the future. Franklin approached Reed's parents for their permission, and explained that the government would pay them the nominal fee for allowing them to take Reed under their care.

At New York City, Reed was brought into the Baxter Building, the central hub for the Mainland Technology Development. The Baxter Building provided him with all of the resources at their disposal, they even developed an oscillating window that could peer into an otherworldly plane of reality known as the Null-void, a second dimension full of toxic air and dangerous creatures.Storm introduced Reed to his "greatest achievements", his adoptive daughter, Sue who is very intelligent and independent, and her younger step brother, Johnny Storm is a thrillseeker and troublemaker but is also smart and charismatic. The three of them got along very quickly. For the next several years, Reed continued to work on his teleportation technology while trying to crack the formula for human being inter dimensional space travel. He also gets closer to Sue Storm and the two kids began to have a young romance.

Soon after Reed met Vincent von Doom, the prince of his home country Sokovia and the expert of biotechnology. Vincent was also a brash and arrogant student, known for his enmity toward his fellow students. One day, Reed caught Vincent in his room rifling through his notes. Vincent had taken it upon himself to read Reed's research, adjusting various calculations along the way. Reed was frustrated, but soon discovered that Vincent was equally brilliant. He invited him to work alongside him on the Null-void project. Over the next five years, Von Doom helped Reed with his Null void math, while Reed aided Vincent's work in miniaturized robotics. By the time they reached adulthood, Richards and his team designed a device that could utalize the Null Void to teleport an object from Earth and too the void. The think tank erected a large platform in the Nevada desert for their first major testing phase. the young geniuses were ready to test their Null void transmitter technology on biological matter. Reed even invited his old school buddy, Ben Grimm to watch him test his dream project. Accompanied by a bevy of military officers and scientists, Reed Richards, Ben Grimm, Susan Storm, Johnny Storm, Dr. Storm and Vincent stood at the control panels of the transmit platform. Reed looked back at Dr. Storm to thank him for all his help and Susan suddenly holds Reed's hand, Vincent took note of this as he also had feelings for Susan Storm.

What the five didn't realize however, was that there was a miscalculation on the transmitter device. They activated the machine hoping to teleport an apple into the Null Void. Instead, they tore open a dimensional breach in space and all five disappeared in a binding flash of light. Reed was found unconscious several yards away and was quickly taken to government custody. The cosmic rays that came from the breach left Reed the ability to bend, stretch and expand his body in any imaginable way. Ben, Sue, and Johnny had also developed powers of their own and were rounded up by the military and were brought back the Baxter Building for testing, however, no one couldn't find Vincent. Reed believes that Vincent maybe trapped inside the Null void portal. Reed designed specialized blue suits for Ben, Johnny and Sue to have, made from unstable molecules which helped keep up with their conditions and abilities and to help them stabilize, control, and contain their abilities. Reed was then approached by Nick Fury, the director of SHIELD. Fury conscripts him to open another portal to the Null Void in exchange for finding Vincent as he hopes that Vincent could be still alive in the portal and wouldn't wish to abandon his partner. Soon Reed, Dr. Storm, Sue, Nick Fury and Johnny watch SHIELD explorers arrive in Null void. Explorers find Vincent on a seemingly deserted planet, who can now control the elements, as well as having telekinetic abilities, and bring him back to Earth but was driven insane by the experience. Unknown to them, they brought back visitors.

They soon encountered an alien known as Annihilus who is an inhabitant of the Null Void who wanted to take over earth's solar system so his race could survive, and they weren't gonna take it over peacefully either as he brings along an army of other alien species known as Arthrosians to start a universal scale invasion known as "The Annihilation wave". After the team (Reed, Ben, Sue and Johnny) went public battling the alien in Oregon, Reed began craving the public approval of being a super hero, ditching to find the cure for their powers but instead, embraced them and encouraged the team to do so as well. He balanced his obsessive love of science against his romantic relationship with Susan Storm and his new celebrity hero status and the team was later known as the Fantastic Four.

Noah Baxter, a friend and fellow inventor, helped Reed Richards purchase the Baxter building. Then, financed by profits from the patents on Reed's inventions, Reed and his team then set out to safeguard the world from any and all threats beyond the purview of conventional peacekeeping forces. Meanwhile, Reed returned his focus to science by perfecting his Null-Void transporter and adapting it to both time travel and accessing parallel dimensions. However, only one member of the group affected by the Null-Void accident remained unaccounted for: Vincent von Doom, the man responsible for the Fantastic Four's failed assassination. Victor went back to his native country after evading quarantine, overtaking it and killing the very man that killed his father, thus renaming Sokovia onto the village he grew up on, Latveria.

Victor place it's residents under his control using neural implants and turned Latveria from being a third world nation into an almost a thriving futuristic society. Meanwhile at the Baxter Building, Reed Richards is looking for ways to cure his friend Ben Grimm, who still blamed him for his mutation, unfortunately Reed couldn't find any results. While running tests on Ben Grimm, the Baxter Building was suddenly attacked by Vincent Von Doom with his hordes of mechanical mosquitoes that were programmed to kill the fantastic four. After the team used their powers to destroy the flies, Reed realizes the flies were sent by Vincent himself. Reed then looked through his destroyed lab and discovered that Vincent's fly bots escaped with the Space Gem; an infinity gem that Richards found prior while he was traveling through The Null Void. "The gem is a powerful object but it's seems to be holding something much more greater inside." is how Reed explained it. Reed kept it to study it. Reed believe if he figure if he can discover what's inside he came use to better the world. But Vincent having a huge grudge against Reed and the rest of his team, he wanted to take the Gem and use his for its own plans. He believed in the same goal as Reed but in his "own" image.

Vincent used the Gem as a battery for his new invention. He made a machine that was able to destroy a country with one strike. Becoming the world most feared man. The world would be under his rule and anybody who opposed him, will meet their fate. Reed knew that he needed to stop Vincent before he goes to far with his plan, but with the lab destroyed, There was nothing much he could do. Reed and Dr. Franklin Storm examine the small machines sent by Vincent. They determine that Vincent is persistent enough ton continue to attack until the Fantastic Four are dead. Dr. Storm says he will alert the Army to take down Vincent. Reed objects. He wants to take down Vincent and retrieve the Space Gem and the codes Vincent has that are connected to the Null-Void. As the Fantastic Four entered Latveria in the Fantasti-Car, Doom emerges with a bazooka and shoots down the craft. The vehicle crash lands and Doom quickly takes out Sue and Johnny. But Reed and Ben approaches Doom, ready to fight, During the climax of the battle, Doom activates his Doom attack bots and they all attack the Four. They fight back but Reed is eventually able to over ride Doom's command and Von Doom is seemingly defeated but it turned out it was just an android replica and the real Doom escaped. The team later retrieved the Space Gem and deactivated Doom's machine. Reed would later give the gem to S.H.I.E.L.D. so know one can use it's deadly power.

"More stories to be Added!"

Brilliant mathematician and physicist, Reed Richards is a young humble genius and gifted idealist and is considered a scientific prodigy who has yet to discover his full potential. An intellectual who prefers to examine foes and if possible negotiate with them before actually fighting them. He is often intrigued by the scientific implications of a problem. Reed's meticulous, scientific nature can cause him to be cold and distance toward family and friends, but Reed is also an extremely likable fellow who keeps a pleasant smile on his face and deeply cares for those he is close to.

Mister Fantastic possesses the normal human strength and build of a man of his age, height, and build who engages in moderate exercise, but thanks to his malleable body, he can mold himself into stronger, more attack-based forms.

As he is a lead scientist at the Baxter Building, Reed has access to enormous governmental resources. He has developed technology such as:

Retrieved from "https://marvelcomicsfanon.fandom.com/wiki/Reed_Richards_(Earth-981)?oldid=236014"
Community content is available under CC-BY-SA unless otherwise noted.