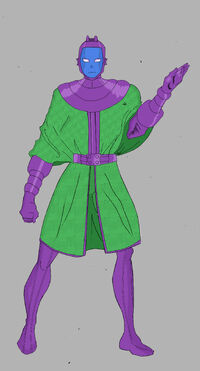 Brown
Unusual Features
When asleep, parts of Reed's body relaxes to the point where they "sag."
Status
Citizenship

Widowed
Occupation
Adventurer, scientist, formerly prisoner
Education
Multiple PhDs in theoretical and applied physics fields
Origin
Origin
In an attempt to open a breach to another dimension composed of anti-matter and cosmic rays, Reed's genetic structure was radically altered, giving him the ability to stretch his body to great lengths.
Place of Birth
Somewhere in minnesota
Place of Death

War against the Masters of Evil

Reed Richard's life reflected that of his Earth- 981 counterpart up to the point of divergence where The Avengers went to war with the Red Skull and his Masters of Evil. Most of the heroes were killed due to this war, including Johnny Storm; The Human Torch and Hank Pym; The Ant Man. After the war, The Avengers began a program of "protecting humanity from itself", taking over Earth and that everyday order was kept by robotic replicas of Ultron.

According to Bruce Banner; when Reed Richards proposed an idea to advance human civilization, The Avengers rejected him, which led to a debate, which then led to him breaking the law, and finally Reed's imprisonment. However, when one Ultron developed self-awareness and grew disgusted with the human race, it decided to take over. As such it killed the Avengers and the nearly all of the rest of Earth's meta-humans and superheroes, including Reed's wife pregnant wife Susan Storm. The Ultron then dominated over the whole Earth and annihilated almost the entirety of the human race. Angred and possibly driven insane, Reed took on the identity of Kang and gathered an army of surviving heroes to stop the robots attempt at conquest, including Bruce Banner (now known as Maestro), and the youthful Next Avengers.

Kang attempted and failed to stop Ultron over 20 times, bringing more and more allies from across all possible timelines to try and stop his foe. This almost caused the time stream to break, which would have threatened to destroy all existence. Becoming aware of this, Reed, posing as Kang traveled back to an alternate past before the Avengers went to war with Red Skull via using his trans-dimensional time chair. He allied himself with his Younger Self to find a means to reverse the damage done to his timeline. His younger self helped him build weapons for him to defeat the Avengers but later refused to give them to Kang after a change of thought.

He then attacked Reed and The Thing and attempted to escape with the weapons. The Storm siblings tried to stop him from leaving, but proved no match. Reed, was the next to challenge Kang and managed to hold his own, taking advantage of Kang's unwillingness to harm him. However during the fight an alert went off on Kang's armor, the time jump had recharged. Kang activated it and escaped with the weapons. Few days later, Kang had broken into a S.H.I.E.L.D. base and stole two infinity gems; Power Gem and the Space Gem from they're containment and mind controlled The Hulk and X-Men's Xorn to help him on his crusade.

He eventually battled the Avengers back at the Baxter Building. However the Avengers simply weren't able to turn the odds in their favor since Kang was able to outsmart them every time and were swiftly defeated. Susan Storm attempted to subdue Kang, but he was able to neutralize her and subjected her to extreme pain.

The defeated Captain America asked why Kang was doing all of this, to which Kang answered it would be easier if he showed them. Kang took off his mask to reveal himself as an older Reed Richards, shocking the Avengers and the Fantastic Four. After briefly telling them his story, the Human Torch missed Kang with a projectile attack that ended up destabilizing the Null Void portal, causing it to suck in objects with a strong vacuum effect. The Avengers along with and Ben and Reed was pulled in. Thinking that he'd finally destroyed the Avengers, Kang went along with his dream of perfecting humanity and protecting the timeline.

Kang then gathered together individuals and founded a group called Children Of Tomorrow, whose aim was to perfect the world and replace humanity as the new race. Their base was built in Northern Germany and called the Dome. The Dome's interior time passed at an accelerated rate compared to the outside world. Over 900 years passed inside the Dome, so their inhabitants evolved to perfect super-humans thanks to the Power Gem that Kang experimented them all with.

However, The Children proved to be formidable opponents, who defeated the heroes. Thor however teleported inside the Dome in search of vengeance after believing that Kang killed the Avengers. Thor rescued Captain Britain and faced Kang. After being defeated by the Children, it was revealed to Thor that the Kang was Reed Richards. Reed left Thor alive and allowed him to escape along with Captain Britain to deliver the message about Richards' newest plans. After S.H.I.E.L.D. freed Zorn and the Hulk from Kang's mind control, they attacked the Children defeated most of them.

When Captain America, Black Widow, Ant Man, Wasp, The Thing, and Mister Fantastic suddenly returned from the Null Void dimensional portal, they revealed too SHIELD and the rest of the heroes that they went to Kang's timeline and stopped Ultron's war. When Kang was finally confronted and out-numbered by the Avengers and their allies, an immense flux of energy was felt and echoed through time and space, erasing Kang from existence with his armor warning him his timeline was altered. Kang warned that Avenger's "betrayal" was only just the beginning and the worst was yet to come before being completely erased from the time stream.

Seemingly Those of Reed Richards of Earth-981

Seemingly Those of Reed Richards of Earth-981

Reed Richards possesses the normal human strength and build of a man of his age, height, and build who engages in moderate exercise, but thanks to his malleable body, he can mold himself into stronger, more attack-based forms. His battle armor however increases his strength, enabling him to lift 5 tons.

Retrieved from "https://marvelcomicsfanon.fandom.com/wiki/Reed_Richards_(Earth-61019)?oldid=259673"
Community content is available under CC-BY-SA unless otherwise noted.