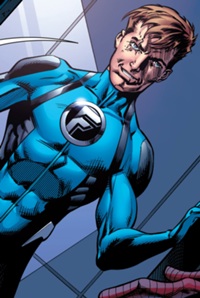 Reed Richards, the only son of wealthy physicist Nathaniel Richards and his wife Evelyn, was a child prodigy with special aptitude in mathematics, physics, and mechanics. Evelyn died when Reed was seven. Nathanial encouraged and guided young Reed in his scientific studies, and Reed was taking college-level courses by the time he was fourteen. He attended several universities.

It was at State University in Hegeman, New York, that Reed Richards first met two of the most important individuals in his life. He was assigned to room with a foreign student, a scientific genius named Victor von Doom. The imperious Von Doom, taking an immediate dislike to Richards, decided to take other quarters. Instead, Richards gained as his roommate former high school football star Benjamin J. Grimm, who became Richards’ closest friend. Richards was already intending to build a starship for interstellar travel. When he told his ambitions to Grimm, Grimm jokingly said that he would pilot the starship for Richards.

Doom became obsessed with developing a machine that could project the astral form of a being into other dimensions. Reed pointed out a flaw in Doom's calculations, but Doom arrogantly ignored his warning, feeling Reed was trying to upstage him. The machine exploded, scarring Doom's face. He was soon expelled for conducting unethical experiments. As Doctor Doom, von Doom would later become Richards’ greatest rival and enemy. Doom blamed Reed for his deformities and he continually tried to prove himself superior to Reed, especially intellectually. They battled many times, but Reed almost always emerged triumphant.

Reed and Ben later served in the military together. Their time in war increased their trust in each other. Richards also met Nick Fury during the war.

While attending Columbia University, Richards rented living quarters at the Manhattan boarding house owned by the aunt of a young girl named Susan Storm. Though she was still only a child, no more than twelve years old, Susan fell in love with the older Richards, much to his embarrassment.

Three years before Reed Richards tested his starship, his father mysteriously disappeared. In fact, Nathaniel Richards had devised a time machine which he had used to attempt to journey into the future of his own world. However, the machine actually transported him to an alternate Earth with a history considerably different from our own. Reed Richards would be reunited with him while visiting this alternate Earth years later. Before Nathaniel Richards left his own time, he made arrangements that left two billion dollars to his son. Reed Richards spent most of the money on his project to build and launch his starship. This project, based in Central City, California, received further funding from the federal government.

Richards recruited his old friend Ben Grimm, who had become a successful test pilot and astronaut, to pilot the starship. Richards was joined in California by Susan Storm, who was now an adult. Richards and Storm were dating at the time.

Before they left Reed saw a man hop on board as a stowaway, following him Reed cornered him and asked his name to which the man said Johnny Storm. Reed took Johnny to the deck where he told Victor about finding a stowaway. Susan ran in and told Reed that Johnny was her brother and that she told him he could come as he was being chased by the Police.

Retrieved from "https://marvelcomicsfanon.fandom.com/wiki/Reed_Richards_(Earth-2226)?oldid=36566"
Community content is available under CC-BY-SA unless otherwise noted.