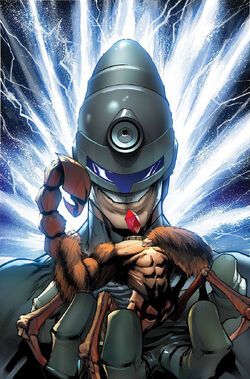 The life we were given was mediocre. It was begging to be destroyed. What Surtur is offering... is a chance to start over.

Reed Richards became Mister Fantastic after he and his crew were bombarded by cosmic radiation. He then spent the next several years as a premiere scientist and superhero, but found himself utterly unprepared for the Siege of the Nine Realms.

Having lost his parents and several of his friends in the war, Reed's dormant personality seized control of his mind. He betrayed the Fantastic Four and remodeled himself as the Maker, and offered his complete loyalty to Surtur in exchange for free reign to experiment on any and all species from the Nine Realms.

Retrieved from "https://marvelcomicsfanon.fandom.com/wiki/Reed_Richards_(Earth-2001)?oldid=260910"
Community content is available under CC-BY-SA unless otherwise noted.