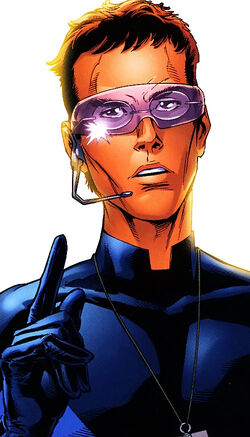 Let's not forget who the smartest person in the room is. It's me, in case you forgot.

Reed Richards has been a genius since he learned to speak. Growing up in New Jersey, Reed's only real friend was his older cousin, Ben. After graduating High School at the age of 14, Reed went on to attend MIT, graduating and becoming a physicist. He was fascinated with the work being done at Potts Industries and started studying Terrigen on his own. He recruited a team of fellow MIT Graduates, Susan Storm and Jonathan Landau to begin performing experiments. One day, Ben visited the lab to see his cousin, and ended up entering into an argument with Jonathan. When Ben was pushed into a table containing Terrigen, all four of them were exposed, mutating into Inhumans.

The four were quickly contacted by Potts International and recruited into their superhero program, branded under the name of the Fantastic Four, appointing Reed the leader, naming him Mister Fantastic, because of his intellect. Reed was upset when Potts decided to rename Ben "Ben Grimm" and pretend the two were not related. However, he was slightly more pleased when they expressed their desire for Mister Fantastic and Invisible Woman to be a couple.