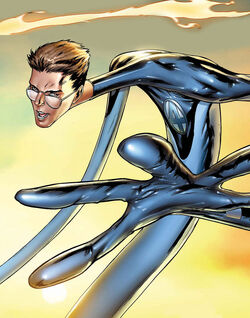 Brown
Unusual Features
Can extend any part of his body, When asleep, parts of Mr. Fantastic's body relaxes to the point where they "sag."
Status
Citizenship

Reed was born in 1990 and was the son of Walter Richards Jr and Diane Richards. Reed was a smart child growing up, he was able to walk at 8 months. On Christmas when Reed was 11 months when his grandfather Walter Richards Sr was telling Reed about his adventures with Captain America, Reed said the exact words "Grandpa is annoying Reed". In 1992, Reed was able to assemble a puzzle in under a minute.

In 2004, Reed met Ben Grimm, although Ben was a year older and the 2 connected and they became good friends. Reed was always bullied but Ben would always protect him.

In 2005, when Reed was fifteen, his family were visited by a government funded school called The Children of Tomorrow located in the Baxter Building for young geniuses and they saw Reed Richards grades in school and saw that they were outstanding so Theodore Storm the owner of Children of Tomorrow Academy, Walter Jr and Diane decided it was for the best and decided to make him go to the school. 1 week later Reed had packed all his things and headed for the Baxter Building. After Reed was sent to his dorm he was greeted by none other than Theodore Storm himself, Reed was already popular at COD Academy and was dubbed "The Smartest kid in school" which led to him and Victor Von Doome becoming friends, Victor was originally the smartest kid. Later that day he met the 14-year-old Susan Storm which he automatically fell in love with. He then became friends with her and the 3 became the best of friends.

Starting his own company

After graduation at age 17, Reed tried to get a job as a scientist at S.H.I.E.L.D, but Victor offered him something he could not refuse, it was an offer for he and Victor to build their own science industries, since Victor had all the money and Reed had all the brains, the 2 made a good team. 1 Year later the company was finally built and was named Von Doome and Richards Industries, Sue would join the company later that year.

In 2011 at the age of 21, Reed discovers a cosmic rift and suggested it could be a huge Scientific breakthrough and tells Victor of it, Victor agrees to do it and the 2 use their brainpower to create a spacecraft to protect them from the Cosmic Rays, after a few months of that they needed a pilot and Victor hired Ben Grimm and Johnny Storm to pilot the spacecraft, after, Reed and Ben hadn't seen each other in 6 years and decided to catch up. After a few days they were ready to go into space, meanwhile Reed was snooping around and saw that Victor had proposed to Sue and she'd said yes, Reed was heartbroken and distanced himself from the 2 through the trip. Suddenly the alarm went off and found out the Cosmic Rays was too strong and that they had to leave before they would be killed by the radiation, Ben and Johnny quickly turned around but the Cosmic Rays was too strong and caused the ship to malfunction sending them all crash landing back. Reed woke up in hospital a week later and was released 2 days later. Reed went into a deep depression due to him failing and Victor and Sue's engagement, so he decided to lay off from science for a while, he then got a few calls from Victor and Sue telling them about the engagement which he just let go to voice mail. One day he was having coffee until he dropped it and reached out and caught it when he was far away, Reed then saw his arm was stretched. Reed had a breakthrough and found out the Cosmic Rays must of given him powers, Reed had to call the rest of the group in, even Victor and Sue though it pained him to do so. He then later spent months studying them and also they were all learning how to control their powers, Reed was the first to master it, then Sue, then Johnny, then Victor it was odd because Reed knew Ben had powers but he didn't see any signs of it but then Ben transformed into a Rock-like creature in the night, and the next morning Ben demanded Reed would find a cure and Reed agreed.

Death of a friend

A few weeks of trying to find a cure for Ben's "condition", meanwhile Victor enjoyed all of his power and thought why not use it for his own benefit, Victor then went on a rampage in New York. Reed then gives them the space suits that they used on the journey to space since it was the only thing that could hold their powers molecules. They all went to battle Victor now going by the name Dr. Doom, Doom proved too strong for them and knocked out Johnny, Reed and Ben. Sue was wounded and used a spear from a Zeus statue with her telekinesis and impaled Doom killing him.

Formation of the Fantastic Four

After Victor's funeral Von Doome and Richards Industries was shut down due to his massacre and death, everyone was in mourning especially Sue and no one kept in contact with each other. Johnny then called everyone up and told them to meet him at the Baxter Building and they did, Johnny then suggested they should form a team to protect mankind called the Fantastic Four, they all agree to form a team. Reed tries to comfort Sue but she is still in love with him.

In 2011, it was revealed that Victor had never died, before Victor went on a rampage he had a back-up plan in case he lost or was ever killed in battle he would program his Doombot to collect his conscience and transfer it into the clone he was working on in secret in Latveria when Victor was buried his Doombot collected his conscience, created a clone and transferred his conscience to the clone. After Victor's conscience was transferred to his clone fully, Victor desired revenge on the Fantastic Four and to do that he had to gain their trust and created a parasite that would swap minds with Reed, he creates it and they mind-swap. Reed then wakes up in Latveria in Doom's lab, Reed as Doom contacts the Fantastic Four and tells them he is trapped in Doom's body and needs help, at first Sue (who still hasn't gotten over her loves "death") "What kind of sick joke are you playing at?" and hangs up. Now Reed being alone he attempts to look into Doom's memories and see how he did it but of course Victor was one step ahead and removed his Reed from accessing his memories so, Reed finds Victor (in Reed's body)and demands his body back, the 2 then battle and due to Reed knowing his body too well and his weaknesses, Reed defeats Victor and brings him back to Latveria and hooks Victor up to a machine where he can find all of his memories, Reed finally finds the solution and gets his body back, Reed as himself goes back to America and decides to step up and declares his love for Sue and kisses her, Sue then reveals that she always loved Reed but didn't know it due to Victor blind her. They then started a relationship.

Reed is an intellectual who prefers to examine foes and if possible negotiate with them before actually fighting them. He is often intrigued by the scientific implications of a problem, so much so that he almost forgets there is a problem in the first place. As Ben once put it, "...if an alien stubbed his toe, Reed would want to spend ten years studying it." Reed is an extremely likable fellow who keeps a pleasant smile on his face. However, he does occasionally lapse into depression over long-standing unsolved problems, most notably Ben’s inability to return to human form and Franklin’s mysterious potential. Reed is a humanitarian who will try to prevent any intelligent being from suffering. This can lead him to do controversial things that fly in the face of all apparent logic, such as when he once revived Galactus.

Hyper-Intelligence: Mister Fantastic’s natural mental abilities were greatly augmented by the Cosmic Rays that gave him his powers.

Plasticity: Mister Fantastic possesses the ability to convert the mass of his entire body into a highly malleable state at will. How his body's respiration and circulatory systems function at these distorted extremes is as yet unknown. Mister Fantastic can alter his form in a matter of seconds, often much less (depending on the complexity of the shape), and revert to his normal humanoid shape within a similar time. The greater the distance he stretches or the more extended the size of the object he becomes, the weaker his overall strength becomes. Mister Fantastic's transformation to a malleable state is reflexive and nearly instantaneous: if he was at his normal form and taken unaware by machine gun fire, his body would still absorb the bullets' impact through radical deformation. Mister Fantastic's skin is virtually impervious to laceration or punctures unless he willfully relaxes his reflexive control over small areas of his body. In that case, scalpels and ordinary needles can penetrate his skin.

Scientific Genius-Level Intellect: Dr. Richards is one of the most intelligent beings on the planet. Reed possesses a mastery of electrical, mechanical and aerospace engineering, electronics, chemistry, all levels of physics, and human and alien biology. A visionary theoretician and inspired machine smith, he has made breakthroughs in such varied fields as space travel, time travel, extra-dimensional travel, biochemistry, robotics, computers, synthetic polymers, communications, mutations, transportation, holography, energy generation, spectral analysis and more. He is one of the few people on Earth to be an expert on other dimensions and the methods by which to travel to and through them. Reed’s patents are so valuable that he is able to bankroll the Fantastic Four, Inc., without any undue financial stress. Not only has Reed proven himself to be a genius in virtually every science native to Earth, he has shown himself to be more knowledgeable than even some of the most highly advanced alien civilizations in the known universe as well.

Mister Fantastic possesses the normal human strength and build of a man of his age, height, and build who engages in moderate exercise, but thanks to his malleable body, he can mold himself into stronger, more attack-based forms.

Equipment: Although the Fantastic Four have numerous devices, crafts, and weapons, there are some items that Reed Richards carries with him at all times.

Retrieved from "https://marvelcomicsfanon.fandom.com/wiki/Reed_Richards_(Earth-1315)?oldid=223320"
Community content is available under CC-BY-SA unless otherwise noted.