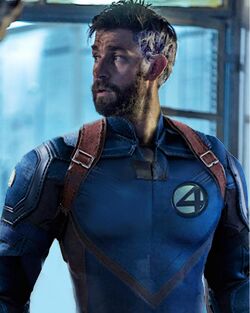 I have to say I've always been fascinated by the concept of time travel. The pitfalls, the possibilities... and especially the consequences.

Reed Richards's father, Nathaniel, abandoned him at a young age, unbeknownst to Reed, in order to travel through time as Kang the Conqueror. Reed was then raised by his mother, who had no idea how to handle his clear genius, which he showed signs off before he could even speak.

Reed began college at the age of 14 and was eventually selected to join the Baxter Foundation, where he met Susan Storm, whose father, Franklin, runs the Foundation.

Over the years, Reed became close with Franklin, who came to see him as a son, which drove his actual son, Johnny, to resent Reed. Eventually, Reed left the Baxter Foundation to teach classes at California Tech, where me discovered one of his students was Ben Grimm, who Reed knew in High School. The two of them became close friends once more, and Reed shared his theories about the vastness of the universe to Ben, who encouraged him to go after his goals of uncovering galactic mysteries.

Reed took this advice to heart and went on to recruit Franklin Storm as he made a deal with a secret government unit called Project: Pegasus to send him to space to study cosmic radiation. Franklin later recruited Susan to work on the project, and she and Reed proceeded to fall in love while constructing the rocket. When it was almost time to launch, Johnny also forced himself into the project, wanting to prove to his father that he was just as valuable as Reed or Sue. However, Reed didn't want to risk everything just to let Johnny pilot the shuttle, so he instead recruited Ben, who had just graduated from the Air Force Academy.

The four of them then took off into space for what was supposed to be a three week long mission. However, their calculations turned out to be off and the cosmic storm they were studying ended up bombarding them, and mutating each of them into a different breed of super-being.

Initially, the four of them were quarantined by Project: Pegasus, but after using their powers to stop an invasion of Moloids, they went public and were dubbed "The Fantastic Four" by the press. They then relocated into the Baxter Building, which was provided to them by Franklin Storm, believing they would be perfect to help run the Baxter Foundation and teach the minds of the future.