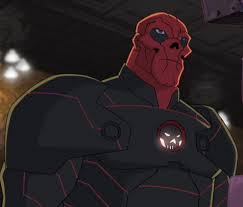 Mark Shmidt, was born Mark Witherspoon, he was raised in an orphanage, where he led a lonely existence. He never really knew about the family secret until he reach manhood. It was learned that he was a true scientific prodigy, youngest student ever admitted to the University in Swissland. He majored in physics and electrical engineering. Double majors in physics and electrical engineering were easy for him, and he received Master's degrees in both. He was later hired by then Stark-Fujikawa (Earth-928.2) has engineer. He secretly stole parts and sold to underworld parties. One of these parties unknown to him at the time was The Association.

One day he finally was able to trace his roots, which wasn't easy his family tree was hidden well and he was the only member left. He learned that Red Skull was his forefather. Most people would horrified to learn this but not Mark. He grew more interested in his infamous forebear and wanted to be like him, the embodiment of evil. Mark like him had a hatred, of all mankind, an emotion that he hide from others. He would go out at night a kill random people with new weapons he had build as testing and to release his rage.

Mark learns of arcane ritual with five arcane relics, where the people are granted either immense power or they pay the ultimate price. These relics, when brought together and the ritual performed, allow the five who posses them to be blessed or cursed with: power, knowledge, immortality, insanity and death.

After the Gathering of the five he gained:

Without his armor Mark Shmidt possesses a strength a little superior than that of a normal human, he also engages in moderate regular exercise.

Because he doesn't have Extremis 16.5, he can't always control all the functions of his suit.

Equipment: A Hydra/Nazi-shaped and customized version of the Hyperpulse Mk 9 Armor
Transportation: Teleportation
Weapons: Mark possesses repulsor-like weapons systems. His ultrabeam is strong enough to cripple a S.H.I.E.L.D. Helicarrier with a single blast.

Retrieved from "https://marvelcomicsfanon.fandom.com/wiki/Red_Skull_2099_(Earth-928.2)?oldid=178291"
Community content is available under CC-BY-SA unless otherwise noted.