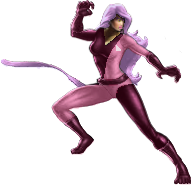 Rebecca Shaffer was born in Virginia Beach, VA. She was a Secret S.H.I.E.L.D. Agent and James Roger's girlfriend until she was shot by Viper.

Rebecca is actually alive, and was hidden by S.H.I.E.L.D. to recruit James into the team. She was actually dating Rafael Sosi all along, who she is engaged with and the couple were actually HYDRA Agents among S.H.I.E.L.D.. She was going to marry Sosi but their wedding was ruined by James under the control of a symbiote.

During the Age of Ultron, Rafael and Rebecca found themselves in a car accident that seemingly killed them both. However, the Weapon X program retrieved her barely alive, got her back to full health and gave her mutant powers so she could join the Hellfire Club's Hellions under Selene's tutelage.

Ailuranthropy: Rebecca had the ability to transform herself into a lavender-furred feline humanoid. She can transform into either a house cat, a large panther, or a human-panther hybrid (a were-cat). She was still able to speak when in her hybrid and animal forms. Her hybrid and panther forms are more powerful than her human form, displaying;

Catseye retained her human intelligence while in her feline form. She possessed a photographic memory, and was able to tell when she was being lied to. She also had extensive ability in hand-to-hand combat, espionage and manipulation.

In human form she possesses normal human strength of a woman of her age, height, and build. In feline form her strength is roughly equal to a large tiger's. As an adult her strength in this form will be greater.

Retrieved from "https://marvelcomicsfanon.fandom.com/wiki/Rebecca_Shaffer_(Earth-1010)?oldid=259060"
Community content is available under CC-BY-SA unless otherwise noted.