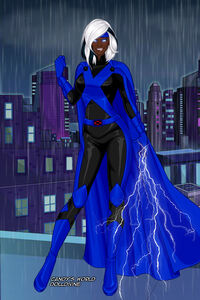 Life and adventure as a mutant and an African royal Princess can be an exciting combination and that is the case for Tempest/Rebecca T’Shairia Munroe. Becka is the daughter of Storm and T’Challa the Princess of Wakanda. Becka inherited her mother’s powers of the Earth's electromagnetic field and the ability to manipulate the weather. Becka also has her mother’s signature white hair while she also has her father’s brown eyes. Despite being born into African Royalty, Becka is a tomboy and the fourth of seven children including two older brothers, an older sister and younger pair identical twin sisters sharing the Wakandan title with her. Becka is the one of three born a mutant along with her older brothers T'Chaka II and Azari but their mutant powers are a combination of both their parents while Becka has the entire Weather Powers from her mother Storm.

Tempest has the power to control the weather She can sense, create, shape and manipulate weather, i.e. the meteorological patterns, creating rain, wind, hail, lightning, snow, sleet, fog and temperature changes. This includes the ability to generate various natural phenomena or control the intensity of the weather in highly concentrated (inside room) or vastly extended (continental) areas.

There are four main factors of Weather manipulation:

Retrieved from "https://marvelcomicsfanon.fandom.com/wiki/Rebecca_Munroe_(Earth-16160)?oldid=253354"
Community content is available under CC-BY-SA unless otherwise noted.