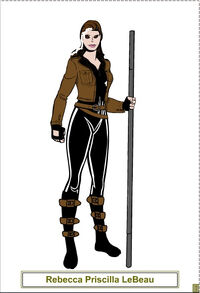 Rebecca Priscilla LeBeau is the daughter of Rogue and Gambit. Her parents became concerned with her well-being when they discovered that she developed dissociative personality disorder once her powers development. Professor Xavier and Jean have been aiding in her recovery.

Rebecca has 4 distinct personalities along with a distinct power set for each.

King: He possesses the powers of Ms. Marvel, which Rogue passed on. The powers really laid dormant in Rogue's DNA.

Queen: She possesses the powers of Selene, which Rogue passed on. The powers laid dormant in Rogue's DNA.

Jack: He possesses the powers of Sunfire, which Rogue passed on. The powers laid dormant in Rogue's DNA.

She possesses the normal human strength of a woman of her age, height, and build who engages in moderate regular exercise. As King, she possesses super-strength (beyond that of Ms. Marvel, who can lift (bench) 50 tons)

Retrieved from "https://marvelcomicsfanon.fandom.com/wiki/Rebecca_LeBeau_(Earth-1992)?oldid=256350"
Community content is available under CC-BY-SA unless otherwise noted.