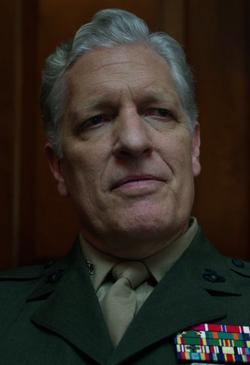 Service in the Middle East

Within the first hour the officer in charge of that mission got his arm blown off, so Lieutenant Castle assumed command. His only goal was to get his men out alive.

During the War on Terror, Schoonover served in the United States Armed Forces and was the Commanding Officer of Frank Castle, whom he deeply respected for his determination and loyalty in the battlefield. During an operation which went wrong, he lost one of his hands, after which Castle took command. Single-handedly he managed to clear their helicopter's landing zone of enemy fighters. Sometime later, one of Schoonover's most loyal soldiers, Gosnell, was nearly killed by an explosion, damaging much of his face. Eventually Schoonover and most of his servicemen returned to the United States of America.

Life as the Blacksmith

I never met him, he never showed his face, all I know is he had a line of pure heroin, shit shipped from the middle east. They call him the Blacksmith.

At some point, Schoonover became a drug lord called the Blacksmith, plotting to take over the drug trade in New York City. Using his position, Schoonover arranged for drug to smuggled into the country covertly. The D.A.'s office arranged a sting operation to uncover the Blacksmith's identity at a meeting in Central Park between the Irish mob, Mexican Cartel and the Dogs of Hell. Schoonover did not show up to the meeting, resulting in the gangs getting rattled and opening fire on each other. An undercover cop and Frank Castle's family were incidentally killed in the crossfire.

If you had to sum up Frank Castle how would you do it?"
"I'd say Frank Castle is a man who would gladly give his life to keep others safe.

Schoonover was called as a character witness to Frank Castle's trial after Castle had murdered dozens of criminals across New York City in search of the men responsible for his family's deaths. As he was questioned by Foggy Nelson, Schoonover described how Castle saved their unit's lives and how he viewed Castle as a hero. When Samantha Reyes tried to question his story, Schoonover revealed that Castle had saved his life as well and he was the colonel in his earlier story.

Following Frank Castle's subsequent conviction and escape from Ryker's Island, Schoonover took the opportunity to cover his tracks and frame his former subordinate. He planted Castle's x-ray outline in Samantha Reyes' daughter's schoolbag, making her believe that Castle was targeting her and her family. When Reyes and Blake Tower had a meeting with Matt Murdock, Foggy Nelson and Karen Page, Schoonover took a sniper position and gunned down Reyes, but Murdock pulled his friends down, saving their lives, though Nelson was injured. This attack gave the impression that Castle was seeking revenge against those who put him in prison. Schoonover then moved onto his new target, Gregory Tepper, killing him in the same way he did Reyes. His third target was Page, but she was saved by Castle, convincing her that Castle was not behind the murders.

Alright, they call you the Punisher, prove it, prove you don't need me anymore."
"One shot, one kill, you taught me that."
"You stupid son o-

Karen Page later visited Schoonover in his home and he welcomed her in with a smile and offered her a coffee. Page explained that she was there because she wished to do a profile on the real Frank Castle and she believed that Schoonover was the only person who had good things to say about Castle. Schoonover told her that he was grateful to her for writing this article to prove Castle was not just a murderer.

Page began the interview by asking Schoonover if he liked Castle as a man and Schoonover told her stories of their time together in the United States Armed Forces. Schoonover was told by Page about an explosion at the docks which Castle was involved with and it was believed that he had been killed. However as they were speaking, Page soon realized Schoonover's identity as the Blacksmith when she noticed a picture of Gosnell, who's burnt corpse she had seen at Pier 81. Realizing he had been made, Schoonover took Page hostage.

Schoonover led Page outside by gunpoint and ordered her to get into her car and drive away, as they started the car some music began playing loudly which Schoonover ordered her to turn off. Page tried to reassure Schoonover that nobody would believe her story as she was not a real reporter at the Daily Bugle but Schoonover did not listen, instead he told her she should have let the story go down with the boat and Castle's body before ordering her to pull over on the side of the road so he could execute her and bury her body.

Suddenly Castle drove out of the shadows and drove into the side of the car, badly injuring Schoonover whose face became covered with blood. Castle ripped Schoonover from the car and began dragging him through the woods. As they walked Schoonover began mocking Castle over his family's deaths, insisting they would be alive if he'd joined his organisation. Page eventually caught up with the pair and tried desperately to convince Castle to let Schoonover go, but instead Castle dragged Schoonover into a nearby cabin.

Once they were alone in the cabin Schoonover watched as Castle began looking at all the various weapons he could use to torture and slowly kill his former commander. Schoonover reminded him that he had taught him everything he knew, even how to hold a firearm. Eventually Schoonover told him to prove that he was the Punisher once and for all. Castle said that Schoonover taught him about one shot, one kill and before Schoonover could reply, he fired a single shot into Schoonover's skull, killing him instantly.

Retrieved from "https://marvelcomicsfanon.fandom.com/wiki/Ray_Schoonover_(Earth-1010)?oldid=139472"
Community content is available under CC-BY-SA unless otherwise noted.