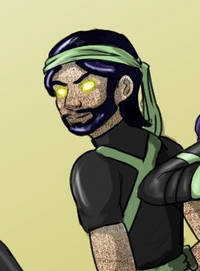 Raymond Aldan Kessler III was born on December 10, 1988 in Philadelphia, Pennsylvania and adopted on December 13, three days later, by ballet dancer Raymond Kessler II and his wife and fellow dancer, Kendra Kessler. He was taken home to their house in Pennsauken, New Jersey where he lived for a short while before moving to a small suburb outside of Philadelphia, when Ray's father became Artistic Director of the Pennsylvania Ballet.

Ray moved to a quaint house in a larger neighboring suburb when he was five where his parents enrolled him in a small Catholic school kindergarten class. Ray attended the same Catholic school for all of grade school, and remained in the same class of students throughout the eight years.

When Ray was 9, his parents adopted a 3-year-old girl from Romania named Christiana. Ray developed a decent relationship with his sister, though the age difference and the growing feeling that he was somehow "different" made it difficult for Ray to form a full-fledged bond.

Ray's parent's relationship began to falter when he was still in grade school, and when Ray was 14 his parents separated. His father moved to a local apartment tower, and Ray remained at home with his mother while seeing his father on the weekends. Some months later, his parents formally divorced.

Eventually, Ray's mother began to talk bad about her ex-husband in front of Ray, and he grew to resent his mother. He began to stand up to his mother when she would attempt to poison him against his father. She would often become defensive when Ray would try to explain that it is not just his father's fault, and would lock herself in her bedroom, leaving Ray alone.

Ray would retreat to his room and remain there for some time. As time went on, Ray began to feel more comfortable when he would retreat to a rocky and forested ravine near his house. His mother would often yell for him, but Ray would wait to answer, as home meant more arguments.

Ray's mutant abilities fully presented themselves during one of he and his mother's heated arguments about their life situation. As Ray would usually remain in a calm state during the arguments, his mother would increase her aggravation and berate Ray needlessly. During this particular argument, he was severely berated and feeling without any sort of protection, he retreated inward and soon his form was covered in an organic rocklike substance. Following that, he ran to the ravine where he uncontrollably reshaped and moved the rocks.

Kendra was raised in an extremely religious home, and she attempted to have Ray inspected by a priest, fearing demons, but Ray's father intervened. Claiming that their son was special and like the "mutants" on the news, Ray was taken by his father to live with him.

Over the next year of living with his father, Ray learned to be very careful with his powers, as he was not entirely sure the extent of his abilities. He learned he possessed the ability to control rocks and the earth, and his rocky form gave him enhanced strength.

Just a few months shy of Ray's 16th birthday, Ray's father told him that he had learned of a special school in Westchester, New York for people like him ran by a man named Charles Xavier. Ray's father explained that it was best for Ray if he were able to learn how to truly control his powers and be around others like him. Ray agreed and was taken to Xavier's School For Higher Learning.

When Ray first arrived at the school, he was at first overwhelmed by the amount of others like him, though he soon became comfortable and slowly began to acclimate to the new environment. He remained fairly closed off, however, and preferred to keep himself or be with a small group of fellow students. Ray noticed many students had chosen nicknames for themselves that reflected their powers, and Ray settled on the simple name "Geo".

Ray excelled in many of his classes, and learned much about the mutant community, the famous X-Men, and the infamous Brotherhood of Evil Mutants. Ray became invigorated by the thought of becoming an X-Men, and made it a personal goal to one day join the team.

Though Ray was not as open as some of the other students, he was always liked by many of the students, as he was quiet and friendly. Many of his teachers took a liking to him, and Ray liked his professors equally.

Eventually, Ray was chosen to join a team of students that would act in a similar capacity to the X-Men, though on a much smaller scale. Ray was teamed with an empath named Katrina Richards, also known as Black Rose, a shadowmancer named Kole Hannigan, also known as Shade, and an emotional energy converter named Angel Sawyer, also called Sin. The X-Man known as Gambit was chosen as their faculty mentor. Despite being forced to work with them, Ray has grown to like their company and, with the encouragement of their mentor Gambit, has slowly begun to open up to his team members.

Geo is a mutant.

Geokinesis: Geo is a mutant with the ability to psychokinetically manipulate, control, levitate, and reshape the element of earth, including sand, stone, rock, lava, and dirt. He can shape the earth into any object of his choose, limited only by the extent of his imagination and continuous contact with or proximity to some form of the earth. He is also able to create minor earthquakes and transform the consistency of rock, such as turning coal into diamond.

Seismic Sight: Geo is able to see shifts in the seismic waves of any earth around him. He has also been known to use this ability to determine if a being is nearby, due to the vibrations that pass through the earth when they move.

Organic Rockform: Geo also has the ability to cover his entire body with an organic rock-like substance. Geo can remain in rockform so long as he is conscious, but if he is knocked unconscious, he will revert back to his human form. Geo cannot partially or selectively transform into rockform; his body is either entirely converted or not. While in rockform, Geo loses some of his mobility, though other factors are enhanced.

Superhuman Strength: While in his rockform, Geo possesses a superhuman strength. He is able to lift up to 5 tons.

Superhuman Durability: While in his rockform, Geo possesses a superhuman durability. He is able to withstand ballistic penetration from small caliber weapons, and is immune to knives and select bladed weapons. Should his rockform be penetrated or chipped, Geo is able to shed and reapply the form in order to heal the damage. In addition, while Geo maintains rockform, he does not need to breathe, and can survive in areas with little to no oxygen. He can also survive at extreme temperatures for up to a week.

Limited Telepathic Immunity: While in his rockform, Geo's mind is difficult to penetrate by lower-level telepaths. A powerful telepath, however, would be able to enter his mind with no difficulty.

Chloropathy: Geo possesses a secondary mutation which allows him to telepathically talk to plants, plant-life, and anything that possesses roots connected to the earth. While he is unable to telekinetically control plants, Geo is able to ask for assistance if he requires it.

Skilled Chef: Geo is a skilled chef, learning the finer arts of cooking from his father and while working in a kitchen at a local restaurant. He prefers French and Cajun style cooking.

Skilled Martial Artist: Geo is an experienced martial artist. He holds a black belt in Shotokan-ryu karate, and has some years of training in the Tai Sheng Pek Kwar and Than Vo Dao styles of kung fu.

In his human form, Geo possesses the strength of a normal adult male who engages in regular extensive exercise. In his rockform, Geo is able to lift up to 5 tons.

Geo is slower and less mobile while in his rockform, and is vulnerable to highly focused shockwaves or sonic blasts. If Geo is not in direct proximity to some form of earth, his geokinetic abilities are severely dampened. While in his human form, Geo has the same weaknesses as a normal adult male.

Retrieved from "https://marvelcomicsfanon.fandom.com/wiki/Ray_Kessler_(Earth-0101)?oldid=246320"
Community content is available under CC-BY-SA unless otherwise noted.