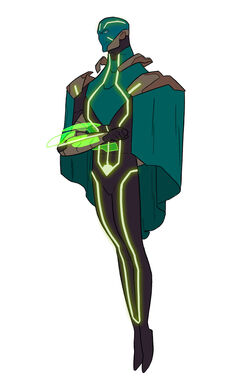 On the main Earth, Kang once searched the Avengers for the Celestial Madonna, hoping to have a child with her. This child would be extremely powerful. He found the Madonna (Mantis), but did not end up having a child with her. On this Earth, he succeeded. The child is the one we know as Time-Lord.

Time-Lord grew up in Kang's future. Limitless technology was at her disposal. Everything was extremely simple. Life was quite boring, to say the least. Especially because she was ignored by her father until she developed powers. So, she understood why her father tried to conquer the past, though she did not accept it.She practiced with her father's technology, planning to travel into the past and join the Avengers or become a vigilante.

When Ravonna turned 13, she suddenly started manifesting superhuman abilities when her father walked into the room. He was suddenly overjoyed, and told her of the great conquest they could achieve. But she cut him off. Her hands started glowing, and she disappeared. In the time-stream, she fantasized of joining the Avengers, and being a kid among adults. But she was dropped off halfway through the battle with the Super-Skrulls, stated she was disappointed that they were ALL kids, figured out who to fight, and started fighting. Afterwards, she stated that she was an Avenger, and began missions with the team. She was soon welcomed, despite her arrogant, Kang-like entrance.

Time-Lord has powers rivaling those of Silver Surfer or even Galactus. Being the "Celestial Matrix," Ravonna can access many powers, including the Power Cosmic, and each one is at its' peak.

Flight/Levitation: Ravonna can fly and levitate at over speeds of Mach V.

Intangibility: Ravonna can phase through any solid object.

Energy Blasts: Ravonna can project beams of energy from her hands sufficient to destroy a small planet at its peak.

Resurrection: Time-Lord can raise the dead, though she can only do this without power dampeners. She cannot currently access this power.

Force Fields: Time-Lord can erect energy barriers that protect from all kinetic harm, and most energetic harm.

Temporary Power Negation: This only works for a day at most, but usually works for no more than an hour.

Super-Strength: Time-Lord can lift in excess of 110 tons.

Time Travel: Ravonna can manipulate the time-stream in any way she wishes. She can enter the past or future, see events from either time without traveling, and can view alternate pasts or futures.

Self-Sustenance: Time-Lord needs not eat or breathe to survive.

Cosmic Awareness: Ravonna can see anything in the universe, if she wishes.

Mental Powers: Time-Lord has minor telepathy and telekinesis that is extremely undeveloped, and will disappear without training.

Nova Force: Same powers as with Power Cosmic, plus:

Super-Speed: Able to run and fly at the speed of light.

Healing Factor: Able to heal bodily damage half as fast as Howl, son of Wolverine.

Retrieved from "https://marvelcomicsfanon.fandom.com/wiki/Ravonna_Richards_(Earth-1175)?oldid=59662"
Community content is available under CC-BY-SA unless otherwise noted.