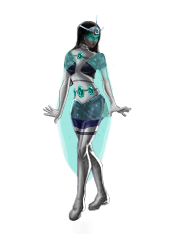 Let us each meet our fate with valor -- and heaven bless you all!

Ravonna Renslayer was the daughter of King Carelius, a ruler in the 40th century Earth. The kingdom of Carelius was the last bastion of civilization unconquered by Kang the Conqueror in that time period. Kang spared them because he was smitten with Ravonna and her fire. She refused his love because he was a commoner and not royalty, but he swore to win her heart eventually. Kang summoned the Avengers to his future in the hopes of winning Ravonna's affection by displaying his battle prowess. Instead, the Avengers joined forces with Ravonna when Kang grew tired of the games and ordered a full invasion of her kingdom. After Kang conquered the Avengers and the kingdom, he demanded a wedding ceremony be prepared. Kang's code had always been to kill the rulers of any conquered nation, however, to prevent uprisings. His general Baltag betrayed Kang in order to honor that code, and tried to have his ruler assassinated. Kang ended up allied with Ravonna and the Avengers to stop his rebellious army. Baltag was defeated, but tried to kill Kang with one last shot. Ravonna threw herself in the path of the blast, saving Kang's life. She professed her newfound love for him with her last breath.

Ravonna is skilled in hand-to-hand combat, and is able to use technology far in advance of contemporary Earth technology.

Retrieved from "https://marvelcomicsfanon.fandom.com/wiki/Ravonna_Renslayer_(Earth-1010)?oldid=148539"
Community content is available under CC-BY-SA unless otherwise noted.