I am not a normal person, Dad. I'm just a teenage freak who's trying to find her own life to live. And this isn't my way of living, it's yours.

For the story of how they fell in love, press Quicksilver x Raven Queen.

Viola Ravenne (or Raven Queen) is a teammate of the Second X-Men and fiancé of Peter Maximoff. She possesses the power of invisibility, super intuition, and plasma energy. She is portrayed by Abigail Breslin.

Viola is the child of scientist Carol Frost and mutant-hunter Jacob Ravenne. At some point, her father found out his children were mutants. Unlike her husband, Carol had her boundaries with mutants (especially if their her own kids). Once Jacob captured and turned them into Stryker, Carol refused to experiment on them. This cause Stryker to doubt her loyalty and shoot her. Viola, Lexi, and Boomer managed to escape and free a 1/3 of mutants. Unfortunately, her mother bled to death and Jacob hunt them for decades.

Orphaned, the three siblings were separated and later adopted. Viola was the temporary child of Mr. and Mrs. Closings, the neighbors of the Maximoffs. Later in the X-Men movies it is reported that Viola's foster mother, Amy Closings, is verbally abused by her foster father, Carol Closings.

X-Men: Days of Future Past

Viola was the temporary child of Mr. and Mrs. Closings, the neighbors of the Maximoffs. As she grew up, Viola spied on the boy next door. One day she saw a truck pull up with three guys (Professor X, Wolverine, & Beast). She followed them into the Maximoffs' house and down to the basement, totally invisible. Viola then followed them to the Pentagon to free Magneto, helping along the way by working—and riding—the elevator and tasering guards. After freeing Magneto, Viola rode in the backseat of Quicksilver's car unnoticed.

In the credits, she is shown to have formerly stolen the School For Gifted Youngsters card and enrolled in.

During the time of Apocalypse, Viola witnessed her mother being verbally abused again. Within an intense argument, Carol begins to beat on her. Viola steps in and uses her powers against him. This results in her killing him.

Viola is a standoffish optimist. She is always looking on the Brightside, but when the time comes, she won't be afraid to unleash her iron foot! Like if someone throws Viola an insult, she'll throw one right back! Part of being an optimist is being very gullible; Viola hardly is.

Viola also seems to have a passion for outcasts. Instead of liking the cool-kids like Scott Summers and Jubilee, she prefers Peter Maximoff and Kurt Wagner. Viola has a secret crush on Peter which she hides by insulting him. 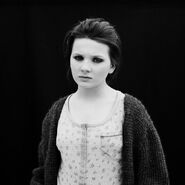 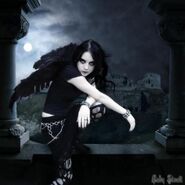 Viola death...
Add a photo to this gallery

X-Men: Days of Future Past 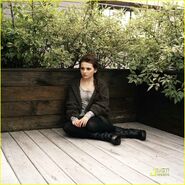 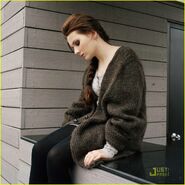 Viola looking at the card.

Viola stands outside the Pentagon.

Viola struggling with her powers 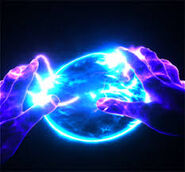 Add a photo to this gallery
Retrieved from "https://marvelcomicsfanon.fandom.com/wiki/Raven_Queen_(Earth_90089)?oldid=256247"
Community content is available under CC-BY-SA unless otherwise noted.