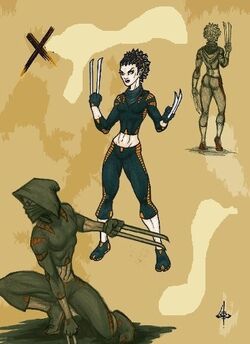 X-23 and Gambit had been X-Men partners for a decent amount of time. Around 2012, he also became a good mentor figure to her. But soon, he became much more than a mentor. After a 1-night stand, she discovered that she would be having his child. He decided that he was going to commit to the relationship, and Raven was born shortly after.

Raven was well-raised, for the most part. Neither of her parents knew much about parenting; despite this, they turned out to be decent parents. She rarely used her powers as a child, for reasons unknown. But, when she was about 7 years old, her mother was killed fighting an unknown enemy, though, based on the body, it is assumed that the attacker was either Magneto or Polaris. This was because the corpse was found with all of the metal spilling out. This sight haunted Raven, and she fled the X-Men. She decided to become the exact opposite of what she was, frequently training, and becoming the New York vigilante Bandit.

For a time, Bandit was one of New York's greatest heroes. Eventually, her past caught up to her, however. When the Skrulls came to Earth, she decided to go save her fellow X-Men. She realized that she would have to go back to her team, however. She did not want to do this, but she realized that there are more important things at stake. She allied herself with the rescue team (the reserves), and they went into space. She was a capable fighter, due to her years of training as a vigilante. After a strenuous battle, the X-Men practically begged her to come back, but she did not want to. She decided to though anyways, adding an X to her name to become the X-Bandit.

Raven possesses all of the powers of her mother: X-23 of Earth-616.

Energy Manipulation: Raven inherited a version of her father's energy powers. They allow her to create an energy field which augment her durability, which she usually performs through her claws or fists. This action simulates super-strength. She can also, with great focus, blast this energy in small kinetically explosive globules.

X-Bandit excels in combat due to her experience as a vigilante.

Retrieved from "https://marvelcomicsfanon.fandom.com/wiki/Raven_LeBeau_(Earth-1175)?oldid=255543"
Community content is available under CC-BY-SA unless otherwise noted.