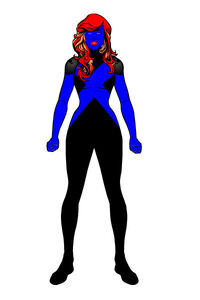 Raven was born over 400 years ago in Germany, but when she was born she was left at a witch's house, with a note that said "if you take this baby, we hope you will not harm us". The witch turned out to be a pre-cog named Irene Adler, aka Destiny, a mutant. After Mystique was raised by Destiny, she was recruited by Nicholas Fury to join SHIELD. After many missions and training, she became the very first X-Man, and was leader until she gradually gave this to Storm, and she became part of the Gold Group of X-Men, lead by Storm, while the Blue was lead by Wolverine, who she is currently dating.

Retrieved from "https://marvelcomicsfanon.fandom.com/wiki/Raven_Darkholme_(Earth-2011)?oldid=230997"
Community content is available under CC-BY-SA unless otherwise noted.