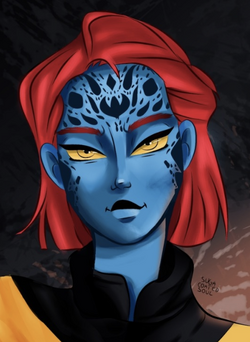 Earth-183
Base Of Operations
The Outside
Characteristics
Gender

I can be anybody you want me to be, but something tells me you won't trust any of them.

Raven Darkholme was hunted from the minute she was born. She grew up bitter towards humanity, but when she was approached by Charles Xavier and offered a chance to live among people like her, she took it. Over time, Raven softened and even reconnected with her son, Kurt, who had been conceived from the demon Azazel. Raven and Kurt became very close, and Raven was devastated when Azazel returned and claimed his son's life for his master, Mephisto.

After falling into a deep depression, Mystique was recruited into the Outsiders under the promise that Mephisto would soon come for her as well and her eternal damnation would be to constantly watch her son suffering. Horrified by the possibility, Raven was ecstatic to try and be a hero again. This was made difficult by her fellow Outsiders, particularly Cable, Spyke, and Beast, holding automatic disdain and distrust for her, due to their experiences with alternate versions of her.

She took this challenge to prove herself on every mission, and was eventually assisted by The Outsider, who recruited Havok from Mystique's reality to remind the Outsiders that not all is as it seems in the multiverse.

After warming up to her, she and Beast would go on to form something of a relationship. It was short-lived however, as Mystique was murdered by the Grim Reaper during a mission to topple the Hydra Empire led by the Reed Richards of that world.

Retrieved from "https://marvelcomicsfanon.fandom.com/wiki/Raven_Darkholme_(Earth-183)?oldid=245076"
Community content is available under CC-BY-SA unless otherwise noted.