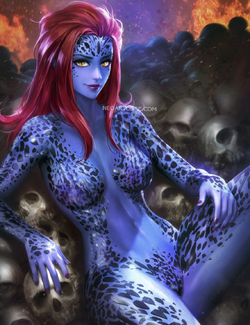 It's true, I could blend in anywhere I want, be anyone I want. But I refuse to conform to what humanity wants from me, because I shouldn't have to.

Raven Darkholme has been fighting for her survival since the day her mutation manifested. She escaped from her family and crossed the border into Mexico, where she started shape shifting to swindle her way through life. She was eventually able to form a crew of thieves, including a man she had met named Logan, who was able to survive execution by firing squad.

Raven and her crew made plans for a bank heist, which Raven sabotaged by alerting the police. While her crew was caught, she made off with the money. She would later encounter Logan on a train, where he questioned her, and she agreed to split the money with him so they could both go their separate ways. However, when his back was turned, Raven kicked him out of the train and kept the money for herself.

She would eventually find her way into Germany, where she took the form of the recently deceased Raven Wagner so that she could live in a castle with Baron Christian Wagner. It was then that she crossed paths with the charming demon Azazel, who impregnated her with Nightcrawler. After he was born, she was forced to run away from Germany and leave him with a caring couple in a small village.

Heartbroken by what she had endured, Mystique immigrated back to America, where she encountered another mutant named Irene Adler, who was blind and capable of seeing possible futures. The two quickly formed a deep spiritual bond with each other, and even went on to rescue a mutant baby named Marian whose powers had sucked her parents into dry husks. Mystique shape-shifted into a masculine form to pretend to be Marian's father while she and Irene raised her together for the first few years of her life.

However, she felt that she was living a lie, and that both Irene and Marian would be better off without her. She went back on the run, and was eventually found by Charles Xavier and Erik Lehnsherr to join a group of mutants. Seeing no other options, she agreed and quickly grew close with Erik, who was the only person to vehemently encourage her to embrace her natural appearance.

Eventually, Magneto and Mystique left the others and formed the mutant nation of Genosha on Asteroid M. They then began recruiting mutants to form their own Brotherhood in order to fulfill their goal of mutant supremacy. Mystique later returned to her old home in Louisiana where Irene and Marian lived, and rekindled her relationship, convincing the two of them to relocate to Genosha.

With Mystique and Irene, who now went by Destiny, back together, she finally started to feel like she was getting her life on track. Things changed when she discovered the son she had abandoned, Kurt, was now a member of the X-Force. Over time, it got even worse when Marian realized Mystique and Destiny had been manipulating her for her entire life, and she abandons the Brotherhood to join X-Force. This abandonment strengthened Mystique's resolve for Magneto's cause, and she was constantly sent on undercover missions to pose as people of interest, including Senator Kelly, and even briefly Professor X.