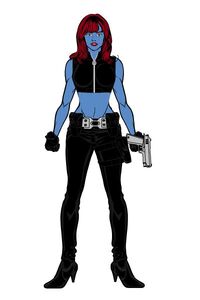 Raven has the normal human strength of a woman of her physical age, height, and build who engages in intensive regular exercise. Otherwise, her strength varies depending on the shape or form she takes. Her upper limits currently appear to be approximately 10 tons.

Retrieved from "https://marvelcomicsfanon.fandom.com/wiki/Raven_Darkhölme_(Earth-515)?oldid=123504"
Community content is available under CC-BY-SA unless otherwise noted.