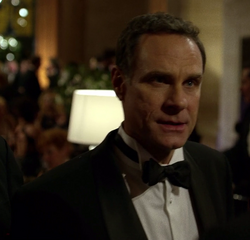 Even though not many people voted for Cherryh, he won his last election for senator. While Leland Owlsley thought that this win was because of the right connection, Cherryh claimed it was because of the advice he got from Cornelius van Lunt and his astrologer.

Since the latest polls showed Fisk his approval numbers rising across political, ethnic, and economic lines, Senator Cherryh's office asked James Wesley if the senator and Fisk could meet up. When told about this request Fisk ordered Wesley to reject the first place Cherryh's office suggests.

Senator Cherryh attended Fisk's gala at the Van Lunt Building where he listened to Fisk's speech. He then complimented Fisk on his speech, asking if he ever thought about running for office, before taking Fisk aside to talk about the zoning issue. These last issues had to be cleared before Fisk could tear down Hell's Kitchen and build his better tomorrow.

A few days later Cherryh cleared the last zoning hurdles, squeezing Fisk for another ten percent for it. This finally allowed Fisk to build whatever he wanted on his properties.

I have done nothing wrong and neither has Mr. Fisk.

Senator Cherryh was arrested by the FBI after Detective Carl Hoffman turned himself over to the 15th Precinct and told the FBI about Wilson Fisk's illegal activities and the names of those involved, leading to everyone connected to Fisk being arrested and investigated. While being taken away by the FBI, Cherryh told the reporters he has done nothing wrong. He also stated that he will be exonerated by the facts.

Retrieved from "https://marvelcomicsfanon.fandom.com/wiki/Randolph_Cherryh_(Earth-1010)?oldid=189967"
Community content is available under CC-BY-SA unless otherwise noted.