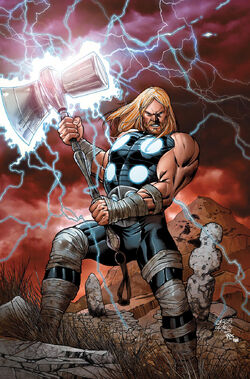 I was never like him, because he was such a weak, cowardly, and foolish creature, but I am stronger and is definitely more worthier than he could ever possibly imagine!!!

Months after the ruinous events of the Ultron Offensive, one of the members of the "cleanup" organization Damage Control found a few strands of hair during a cleanup inside the Avengers Tower, strands that had fallen off of Thor's head during the ensuing battle. The suspicious member, kept the hair samples for himself in case he might need it for a later use. Unknown to everyone else, this cleaner was late revealed to be a double agent of the worldwide, terrorist organization known as Hydra.

The clone and cyborg, later known as the infamous codename of Ragnarok, was created in the early stages leading to the events of the Global Superhuman War by Hydra, under the orders of the man secretly posing as the deceased Baron Heinrich Zemo, using the DNA sample they got from the the Norse god and warrior through their double agent. The clone's main purpose was to assist the forces of Hydra in order to battle him against the God of Thunder himself, when the time eventually comes. The clone was eventually tested, proving his effectiveness and eventually set to be deployed, when they will be needing a God of Thunder, for themselves.

During one of the very battles between the Ultimate Alliance and the Movement Alliance, Hydra unleashes its cyborg clones which slowly malfunctions and deteriorate over time due to a highly-advanced jamming device that were both invented by Hank Pym and Tony Stark, resulting into each of their own immediate apparent destruction, only right after they've battled their real-life counterparts. Despite the several setbacks that have been occurring on most of these clones, Ragnarok was one of those very few clones who weren't affected by the jamming device, causing for the android as it suddenly unleashes its full strength in rage by taking out and killing a countless number of heroes and anti-heroes who have decided to persistently help the Ultimates, along with his outburst of breaking several cities in half, all around the world, before his orders of exterminating all of his targets were finally stopped and were prevented even further by the members of the Ultimates, including the Hulk and Thor himself.

During the final days of the inflicting war, an enraged and wrathful Ultimate Hulk finally uses Ragnarok's own Power Battery Hammer during their final stand-off, in order to defeat the clone after the clone seemingly have won battling against Thor, although in reality, it was just a move the God of Thunder had made against his own clone, just so the Hulk could have made the finishing blow on the cyborg Asgardian successful. As the Green Goliath repeatedly smashes Ragnarok's own hammer at his fragile, cybernetic head, the clone of the God of Thunder has finally fallen, defeated at the hands of the Hulk and his own real-life counterpart, proving that the originals themselves would always remain triumphant against their own imitations.

Later on, most of Ragnarok's scraps and damaged body would eventually appear inside the lab of a S.H.I.E.L.D. facility during the day when the legislative bill known as the Superhuman Registration Act has finally been abode and passed by the supported ratification of more than 117 countries, including the United States of America. During that very day, Ragnarok was seen in the lab as he remained in suspended animation, being experimented upon by S.H.I.E.L.D. when they were trying their very best to repair the mangled cyborg, to which they were victorious in the end, but with the help of three of S.H.I.E.L.D. and the Registration's greatest allies, possessing three of the greatest minds on Earth. Those three were Tony Stark, Hank Pym, and Reed Richards.

Due to Ragnarok's return, he was eventually used and was programmed by S.H.I.E.L.D. in order to pose as the real Thor, replacing him since the real God of Thunder have disappeared after leaving Earth for a while, in order to save Asgard from the threats of all the Nine Realms' Giants threatening to invade Asgard, which were led by the unwillingly alliance of the Ice Giant, Ymir and the Fire Giant, Surtur, all for the sake of having their revenge against the All-Father Odin.

With Ragnarok posing as the Thor for supporting the Superhuman Registration Act, this action fooled most of the Anti-Registration Group, including Captain America, its founder and leader, believing that this could have been some sort of mistake, since Thor would have never submit into any accords made by any man ever again, unless it is really necessary for the sake of humanity's safety and survival from the maintenance of super-powered individuals, ever since Ultimate War has proved the entire world of how much dangerous superhuman powers and abilities could be once it goes out of control.

During a battle between pro and anti-registration forces, Iron Man unleashes his clone which malfunctions and almost kills the anti-registration member, Goliath, but at the cost of killing a few more heroes and villains in the process. It was later finally revealed to everyone else, including the Anti-Registration Group, that the cloned thunder god was re-modified and was resigned by Reed Richards, Hank Pym, and Tony Stark. The debut of the Thor clone affected both sides and killed several numerous individuals, with a powerful blast in the midst of the chaotic battle.

Due to Ragnarok's actions into, it continuously proved that pro-registration forces have such a powerful weapon at their disposal, which causes for some heroes and villains into switching sides, while Susan and Johnny Storm decide to oppose the Registration Act and finally join Captain America's Resistance, since Reed took part in its creation, a decision that ultimately led towards the momentary disbandment of the Fantastic Four.

However, as the Thor clone continued his assault, it didn't last much for long, when the Invisible Woman uses her powers to protect the Secret Avengers, the new name for the anti-registration group, and allowed them to escape. Ragnarok was immediately shut down and taken back to base. Once they returned, Reed Richards began to examine what could have gone wrong with the clone, but there was seemingly nothing to worry about, after revealing that the clone was fine. The Thor clone provoked a wave of shock among the opponents.

During the final battle of the Civil War, Thor led his own unit division consisting of offensive robots under his command, alongside his co-leaders Ms. Marvel and the War Machine. He faced Storm and the rest of the X-Men, unleashing his wrath upon her and causing damages to the team, severely wounding most of the members. Storm was quickly joined by Susan Storm, alongside Johnny Storm, who wanted to destroy her husband's recreation, but both were single-handedly helped by the efforts of the Greek demi-god Hercules, who finally destroyed him and his robotic army, for the second time.

After knowing that he had Thor's DNA and several memories from his genetic template's past, Ragnarok manages to remember, track, and find the location of the realm Asgard due to the Cabal's orders. He, alongside the Dark Avengers and the Cabal led by the Iron Patriot, finally extracted their plan to breach, assault and invade Asgard before the Avengers and the other heroes could arrive at the scene even stop their evil scheme at invading Asgard.

After he was eventually defeated by Loki during the final battle. Before Loki could get any closer to finish him off, a Doombot tries to attack Loki, distracting him, causing for Ragnarok to gain the upper hand and stab Loki with his own sword, the Laevateinn, critically injuring him. Still, Loki manages to seemingly kill Ragnarok, but it was revealed that Norman used Ragnarok as a bait, taking long enough for the Void take over Sentry, who later kills Loki.

Because of this, Thor still blames Ragnarok, (who was surprisingly still alive) for being involved in the death of his brother and charges against him and attacks him. After battling, Thor manages to mercilessly kill his corrupted clone in rage by successfully crushing and ripping off his Vibranium body, limb-by-limb with his bare hands using his sheerest strength, then frying him with a thunder strike using the Mjolnir and finally killing him before he can manage to fix himself by smashing his skull with his own weapon, the E.D.I.'s Power Battery Hammer, ending Ragnarok's "life," once and for all.

His scattered synthetic corpse were later shown to have been melted and fully disintegrated after Asgard's destruction at the hands of the Void, during the following explosions at the end of Asgard's ultimately destruction caused by the aftermaths of Siege, assuring that Ragnarok will never return or come back ever again. However, Ragnarok and the Cabal's actions on Asgard were never forgotten by everyone throughout the rest of the Nine Realms and the Multiverse.

In fact, the partial destruction caused by the events of Siege, created a large crack in the undergrounds of Asgard, creating a gateway between Asgard and the realm of the Fire Demons and their Fire Lord Surtur, Muspelheim. Thanks to the gateway bridge being accidentally opened between two realms, not only Surtur, but also the Goddess of Death Hela, would later have the chance to continue her attempt on taking over Asgard, and as for Surtur, he will finally be able to complete and accomplish the most horrific doomsday event in Asgardian culture prophesied by many individuals for several millennia, known as Ragnarök.

Much like the original Thor, the Thor clone's strength, endurance and resistance to injury are greater than the vast majority of his superhuman race and most superhumans.

Retrieved from "https://marvelcomicsfanon.fandom.com/wiki/Ragnarok_(Earth-61615)?oldid=208787"
Community content is available under CC-BY-SA unless otherwise noted.